The 17" unit with Gianluca Masi, just minutes before preparing a live, online event 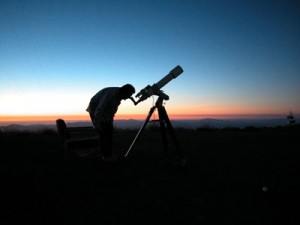 I observe from Ceccano (FR, Italy), 90 km south of Rome. I graduaded with full marks in Physics (Astrophysical address) at the University of Rome “La Sapienza” and I earned a PhD in Astronomy at the University of Rome “Tor Vergata”. My interest in astronomy started late in the ’70s, inspired by those old science fiction series: Star Trek and Space 1999.  In 1980 I read a book titled “La Conquista del Cielo” (“The Conquest of the Sky”), by G. Ruggieri. I was definitely captured by the images of nebulae and galaxies. In 1983 I received my first telescope, a 6cm refractor. With it, I managed to observe the Moon, the Sun, a few double stars and the Great Nebula in Orion.

In 1985 I received a new telescope, still perfectly working: a Vixen 150mm-f/5 reflector with computerized equatorial mount: thanks to it, I observed tons of deep-sky objects, especially galaxies and star clusters. Few years later I started doing astrophotography and, after the first attempt,s the technique was good enough to have some pictures hosted by national magazines and newspapers. On Aug. 4, 1989 I was the first in Italy to spot the desappearance of one of the Jupiter’s equatorial bands. 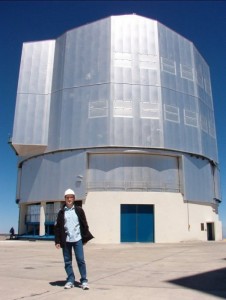 The author at the Very Large Telescope facility in Chile

As for my scientific interests, I started studing the cosmological distance ladder issues and the determination of the Hubble Constant; then, I switched to searching strategies for the near-Earth Objects (NEOs), with special attention for those having their orbits entirely inside that of our planet (inner-Earth objects, IEOs): for these activities I was involved in the CINEOS project (at the Astronomical Observatory of Campo Imperatore). Since 1988 I’ve been a very active member of the staff of the Astronomical Observatory of Campo Catino. During my PhD, I worked for several months at the European Southern Observatory (ESO), Chile, where I performed photometric and astrometric observations of NEOs and comets from La Silla. My current scientific activities include minor bodies in our Solar System (comets and asteroids, especially NEO), variable stars (mainly cataclysmic) and exoplanets.

Since 1992 I’ve been member of the Ulysses Comet Watch Network. From the same period I started my interest for a new topic: the CCD (Charge Coupled Device) technology and its use in astronomy. One of the most intense periods of my astronomical life has been the passage of comet Hale-Bopp, which was followed for several months, especially when it was particularly bright. I collected more than 500 images using a SBIG SBIG ST-7 together with my old 150mm telescope. As for comets in general, I was involved in the “Small Telescope Science Program“, managed by the team of the space mission Deep Impact ( NASA, JPL, Ball Corporation). 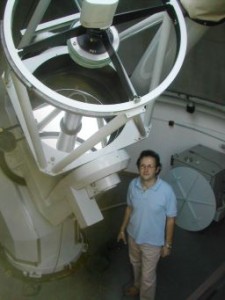 The author at Campo Catino observatory

On June 2015 I co-discovered the historic supernova ASASSN-15lh, the most luminos supernova ever recorded in human history.

The increase in the observing activities was possible since 1997 thanks to the availability of a C11 OTA, and later of  C14 OTA on Paramount ME robotic mount, remotely controllable via the Internet. Today, the Virtual Telescope Project offers two amazing robotic telescopes, with endless application chances.

The public activity has been very intensive, too. I gave many conferences around the world on different astronomical topics, very often motivated by special events. Since Sept. 2004 I collaborate with the Planetarium of Rome and since Jan. 2006 I’m curator of the Planetarium as an astronomer of Zetema Progetto Cultura. From June 2008 to 2011 I’ve been vice-director of Coelum Astronomia magazine and Director of the Coelum Stream project.

Since 2010 I’m National Coordinator in Italy for Astronomers Without Borders. Since 2014, I have been for a few years the scientific director of the “Acquaviva delle Fonti” astronomical observatory. Since 2016, I’m National Coordinator in Italy for Asteroid Day. Since 2019, the International Astronomical Union (IAU) appointed me as IAU Dark Skies Ambassador, to preserve dark skies against light pollution. I serve as jury foreman of the “Federico II e i Poeti tra le Stelle” International Prize.

I’m very interested in the cultural relationships among astronomy, art and the stars. I did an interesting work studing the stars in the “Starry Night over the Rhone” masterpiece of Vincent van Gogh. Over the years I had the opportunity to work with sevaral artistis like Patrizio Fariselli, Carlo Guaitoli, Leonardo Petrucci, Giovanni Renzo and Tomas Saraceno.

Since 2009 I collaborate with “Geo&Geo”, a well-known Italian TV show popularizing natural sciences and from 2010 I strongly collaborate as guest with “Cose dell’altro Geo”, a well-known TV show presenting many themes related to natural sciences, where I offer my skills in astronomy and science communication. My events and contents are featured by the most important media of the world.

Over the years, I won several international prizes, including the Ruggieri Prize by the ‘Unione Astrofili Italiani (2003), the “Shoemaker NEO Grant“ by the Planetary Society (2005) and the Tacchini Prize by the “Società Astronomica Italiana” (2006), for one of the five best PhD thesis in Astronomy in 2006. 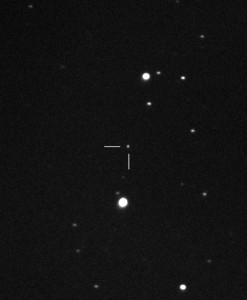 The asteroid (21795) is named “Masi” after me, acknowledging my astronomical researches and activities.

NASA did an Internet website to introduce children to space science, considering my case as the example of a young, very active observer.

I love classical music, especially Bach, Brahms and Mahler. I find of great interest the history of these great composers and see how some of their masterpieces were inspired by the skies.

The Virtual Telescope is my last effort: its goal is to offer to everyone in the world a chance to look at the Universe, even to those without an advanced instrument or resource, both for science and fun.

Also, photography is another important area of interest for me. I’m been imaging since my teen age, also doing a lot of work in my darkroom. You can visit my portfolio here.

Publications (this link does not include publications on popular magazines/newspaper); citations on the web (Google).