What is a Solar Eclipse?

Our planet Earth has a natural satellite, the Moon. It takes less than one month to the Moon to complete an orbit around us. Of course the Earth and the Moon, as a couple, are orbiting around the Sun in one year.

Motion of the Earth and the Moon around the Sun

Because of its motion around us, we see the Moon moving in the sky, mainly across the Zodiacal constellations. But we are orbiting around the Sun, so from the Earth we also see the Sun apparently moving along the ecliptic, the projection in the sky of our orbit around that star.

In short, even if for different reasons, both the Sun and the Moon are moving in our sky. The plane containing the orbit of the Moon has an inclination of almost 6 degrees respect to the ecliptic plane, otherwise the Moon, too, would move on the same apparent celestial path of the Sun, the ecliptic.

While orbiting around us, at some point the Moon will show in the direction of the Sun (new Moon) or to its opposite (full Moon). If both the Sun and the Moon would move along the ecliptic, we would have a solar eclipse at every new Moon (being our satellite in front of the Sun: moving on the same path!) and a lunar eclipse at every full Moon (the Moon would be inside the Earth’s shadow, cast on the ecliptic plane!).

Because of those almost 6 degrees between the two planes, having an eclipse is not frequent, as the alignment mentioned above is not obvious. Here it is a side view of this.

Consequences, at new and full Moon, of the 6 deg inclinations between the ecliptic and lunar orbit planes

Of course, while orbiting around us, the Moon can be above or below the apparent celestial path of the Sun (we repeat, its apparent path is called ecliptic). When it moves from above to below and vice versa, the Moon as to cross the ecliptic: those two intersection points are named “nodes”. 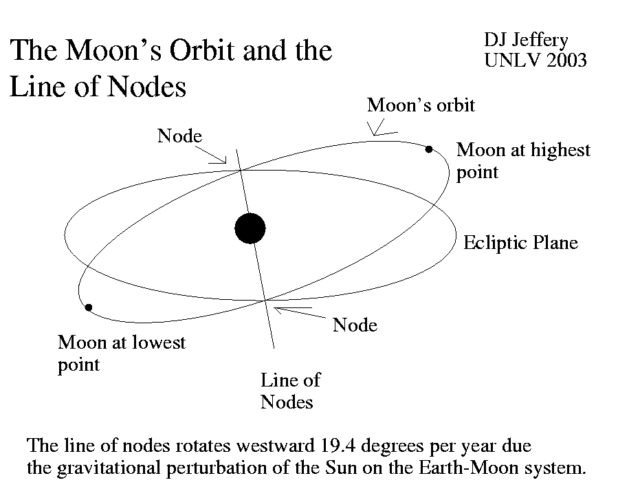 Those “nodes” are essential for the eclipses. When the Moon is on the nodes, it is on the ecliptic. The question is: where is the Sun in that moment?

If in that very moment the Sun is in the same node, too, then we will have a solar eclipse (and of course, the new Moon), while if the Sun is on the other node, our star, our planet and the Moon will be aligned and the shadow of the Earth will cast on the Moon: here it comes a lunar eclipse (and the full Moon).

Of course, the alignment required for the eclipses (both solar and lunar ones) can be more or less perfect, so the eclipses can be partial or total: for the solar ones, it will be partial when the Moon will cover only part of the Sun, total when the Sun will be completely covered by our satellite. Furthermore, because the lunar orbit is elliptic, its distance from us varies (from about 360.000 km – 225.000 miles to about 405.000 km – 251.000 miles) and, as a consequence, the apparent angular size of the lunar disk varies, too. This affects a solar eclipse, no matter the quality of the alignment mentioned before.

Because the Sun and the Moon disks have almost exactly the same angular size (about half-a-degree), those variations matter: if when both the Sun and the Moon are in the same node, our satellite is too far, the lunar disk will be smaller than the one of the Sun, resulting in an “annular” eclipse.

Even when the Moon is at its minimum distance  from us, the angular size of its disk is just a bit larger than the one of the Sun, so even in this ideal case the totality will last a few minutes (the maximum duration possible, considering the factors above and a few more, subtle ones, is a bit more than 7 minutes).

Another consequence of the marginal difference in angular size between the Sun and the Moon is that even the total solar eclipses will be total only from a very narrow strip on Earth. If you are inside it, you will see the total event (the closer to the center of that path the better) and there will be a place along that path from where you will have the greatest eclipse and greatest duration events: for total solar eclipses they are coincident within a fraction of second.

The 21 Aug. 2017 solar eclipse will be total, with a maximum duration of the totality of 2 minutes and 40 seconds in Kentucky.