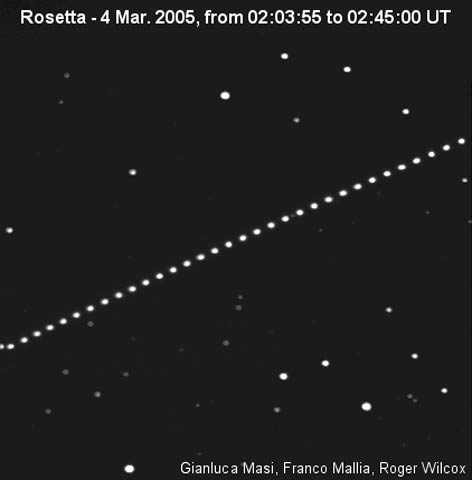 Rosetta spacecraft during its 4 Mar. 2005 flyby with the Earth

We all know Rosetta, the ESA spacecraft which last November 2014 made possible for a lander, for the first time ever, to touch down a cometary nucleus, as part of a long term study of comet 67P/Churyumov–Gerasimenko.

Undoubtedly, Rosetta is one of the greatest endeavours in space exploration and the science it is providing will help us unveiling both history and evolution of our Solar System.  Launched on 2 Mar. 2004, on 4 March 2005 – one year later – it had the first of three flyby with the Earth (among flybys with Mars and a couple of asteroids), an important maneuver part of its long journey to its target. The minimum distance from us incthat 2005 flyby was of less than 2000 km.

At that time, the author and a couple of other observers remotely used a telescope in Chile, at Las Campanas Observatory, to capture a very unique document: a movie showing Rosetta flying above us, around its minimum distance from our home planet. After 10 years from that night, I wanted to share it again.

The static image above is a composition made with all the frames where Rosetta was visible: the spacecraft is the bright point of light apparently tracing a dotted line. A careful inspection shows that the path is not a perfectly linear, because of  parallax effect due to the very close distance of the object: quite an interesting document!

Below the same frames were used to make a movie, showing very well the apparent motion of the spacecraft:

Rosetta spacecraft during its 4 Mar. 2005 flyby with the Earth: movie

This movie wan the 2nd prize of a specific ESA contest.