The year is slowly ending, we start looking into 2017 to look for nice astronomical events and the first one we find, a very close Mars and Neptune conjunction. It will show across the the end of the year, peakingin the first hours of 2017. 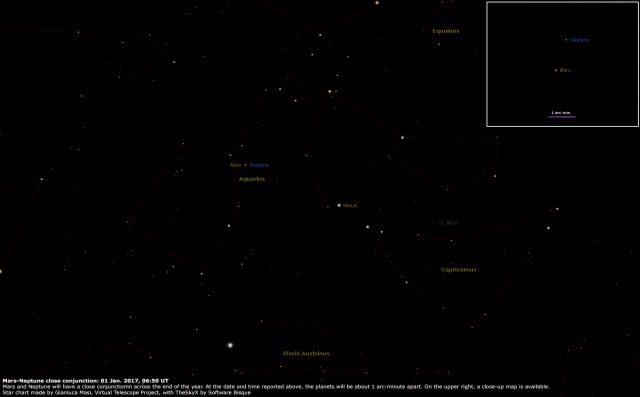 While wandering across the stars, along the Zodiac, sometimes planets meet each other. Last Summer, we had an epic, extremely close conjunction involving the two brightest planets, Venus and Jupiter. Of course these conjunctions are a simple question of perspective: while at very different distances from us, the involved planets show in the same direction, along the same line of sight, resulting in the same patch of heaven.

It is now time to look for another couple, Mars and Neptune, once again involving a inner, rocky planet (Mars) and a gas giant (Neptune). On its fast motion along the ecliptic, the Red Planet is quickly moving where the slow Neptune is, finally overtaking it. The Mars and Neptune conjunction will enter its climax on 31 Dec. 2016 around 14:00 Universal Time, when the two planets will be closer than half-a-degree, that is the apparent angular size of the lunar disk.

Then the faster Mars will approach Neptune, kissing it on the 1st of January 2017, around 06:50 Universal Time: at that time, they will be a bit more than 1 arc-minute apart. Above is a map to guide you to look for the two planets.

While Mars will be brighter than magnitude 1, Neptune will be shining at magnitude 7.9. You will need a binocular to spot it and Mars will help you to locate it. For casual stargazers, this can be a unique opportunity to see Neptune, to date the last planet of our Solar System, with the help of Mars pointing it.

So, while celebrating the New Year, take some time to look there and admire those two worlds kissing each other.