Messier 33 (NGC 598), also known as the Triangle’s Galaxy because of the constellation hosting it, was discovered by John the Baptist Hodierna in 1654 and it is about 2.9 million light years from the Earth. It is therefore the second, regularly sized galaxy closest to the Milky Way, after that of Andromeda. 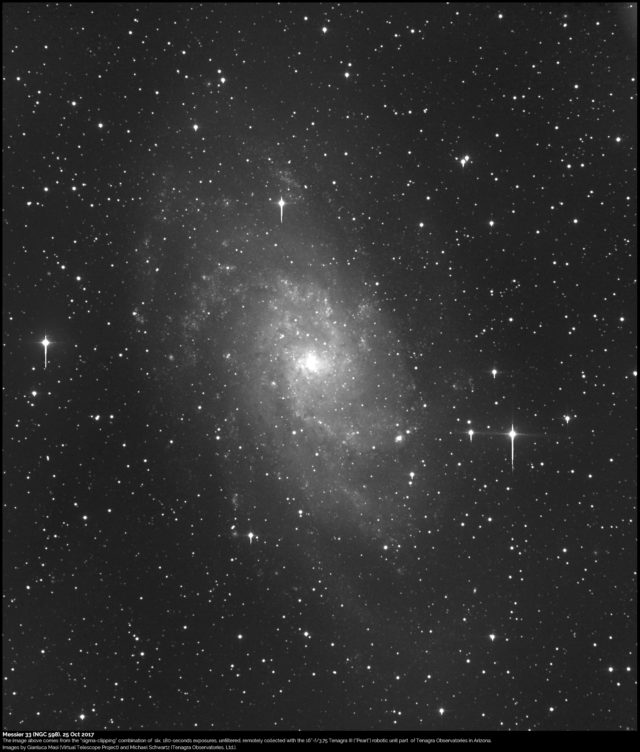 The image above comes from the average of six, 180-seconds exposures, unfiltered, remotely taken with the 16″-f/3.75 Tenagra III (“Pearl”) robotic unit part of Tenagra Observatories in Arizona.The long vertical “rays”coming out from the brightest stars are the typical signature (“blooming“) of science CCD cameras.

Messier 33 (M 33) is one of the most beautiful objects observable in the northern autumn sky. It requires a good telescope and, above all, a dark sky, which allows for an high contrast. It is an angularly extended object (about 71′  x  42′), while its real dimensions tell of medium-size galaxy (50/60 thousands light years large), about half of our Milky Way. Its relative proximity, its actual size and perspectival position (it appears to us flat, seen frontally) make it much harder to observe than expected from its apparent magnitude, estimated at about 6.3.

Here it is an excerpt from my observing logs, written a few years ago on a cold September night from the hills around Senigallia (Italy): “With my beautiful Meade Lightbridge 16’’ Dobson, I hunted for the famous M 33, the Triangle’s galaxy, finding it at 65 magnifications. It appeared rather weak and evanescent, also because of the sky, not really perfect. But with a more careful look, it still showed its huge dimensions and a hint of material all around the core, which are of course the spiral arms of this gorgeous galaxy . It was also well visible the HII region inside M 33, in the North-East corner, called NGC 604, which looks like a bright nodule, located on a galaxy arm! “

The writer has been able to observe it under much better sky conditions, surprisingly finding its spiral arms easy to see, being well within the capabilities of a telescope of this size!

I assure you that seeing the structure of such a galaxy through the eyepiece of your instrument is an absolutely unforgettable and tremendously exciting experience that I personally cannot wait to repeat.

I suggest you to “hunt” for this authentic gem of the sky with every instrument you have: even just finding it and guess its size would be a first rate experience.

Finally, a curious fact about M 33: so far, we never observed any supernova in this galaxy, only six novae. Considering the unpredictability of the cosmic dynamics, it would not surprise us if we will be part of such an event, which in this case would make history. At the Virtual Telescope Project we will always be here, sitting in the first row, ready to bring to you such a wonderful news and event. Stay tuned!