Next 13 Nov. 2017, the sky will have a special surprise for those waking up early in the morning: a spectacular conjunction between Venus and Jupiter, coming closer than 0.3 degrees, resulting in a stunning sight at dawn. 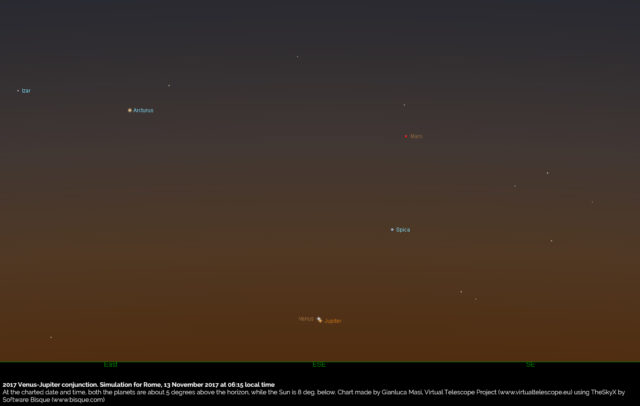 Surely, planets are leading actors on the cosmic arena up there. As their name says (“Planets” comes from the ancient Greek ἀστήρ πλανήτης astēr planētēs, or πλάνης ἀστήρ plánēs astēr, which means “wandering star“), they continuously dance in the sky, each moving at its own rhythm, along the Zodiac. While they cross the stars, sometimes they apparently meet each other, shining for a while in the same spot of the sky: we call these events  planetary conjunctions. They can be very spectacular, when bright planets are involved and when they come very close.

Venus is by far the brightest planet (after the Sun and the Moon, it is the 3rd brightest object in the sky), with Jupiter being almost always the 2nd one, so when these two objects make a close conjunction, it results in a must-see event. This is always an amazing sight, even by naked eye, with the two objects shining above the western (at sunset) or eastern (at dawn) horizon.

Recently, we had a couple of these spectacular “kisses” between Venus and Jupiter, covered very well by the Virtual Telescope Project.

On 1 July 2015, at sunset, Venus and Jupiter offered one of these shows and we made an online observing session covering the event. 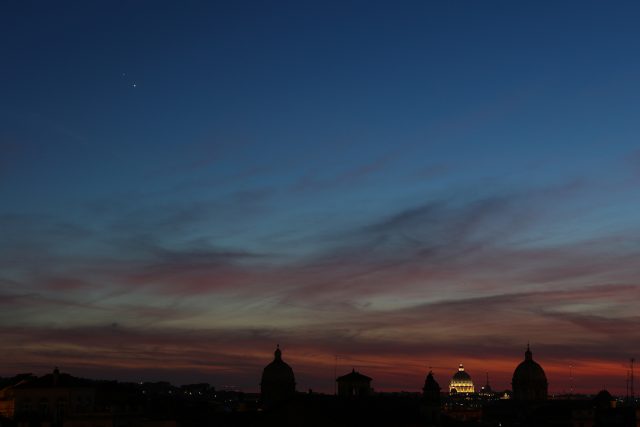 Venus and Jupiter were two gems hanging above the celebrated skyline of Rome: 29 June 2015

On 27 Aug. 2016, the two planets made even better, offering, again at sunset, their closest conjunction we will see for a few decades: they reached a minimum angular separation of less than 4′ arcminutes, that is only 1/8th of the angular size of the lunar disc. 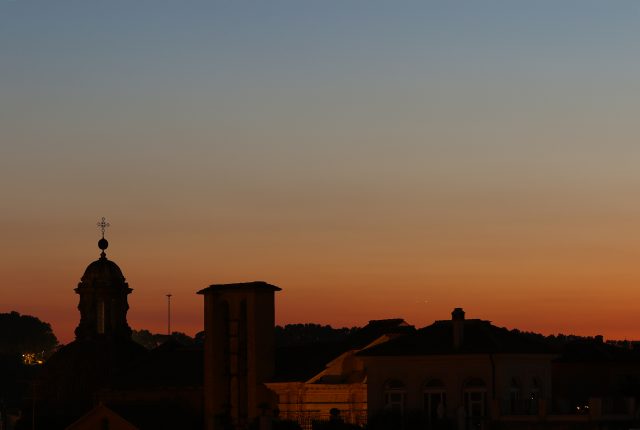 Next 13 November, this time at dawn, Venus and Jupiter will kiss again, reaching a minimum angular distance of less than 0.3 degrees, about 1/2 of the apparent size of the Moon. Needless to say, it will be an easy sight by naked eye, provided you have full access to a clear Eastern horizon: both the planets will be only a few degrees above the horizon, while the sky will be getting brighter and brighter, with the Sun ready to rise. A binocular can help locating both the planets.

The map at the beginning of this post also shows a few bright stars, as well as planet Mars, sitting about 25 degrees apart.

The next Venus- Jupiter conjunction will be on 22 Jan. 2019, but it will not be as close and spectacular as this one: you are adviced!