Next 3 Dec. 2017, one year after its last show,  the Supermoon will be back again in the sky, being the only one visible in 2017. On that day, our beautiful Moon will be full while close to its perigee (its minimum distance from the Earth, which will be reached on 4 Dec., at 357.495 km from us, compared to an average distance of about 384.000 km), then it will be a little closer, brighter and apparently bigger than usual. 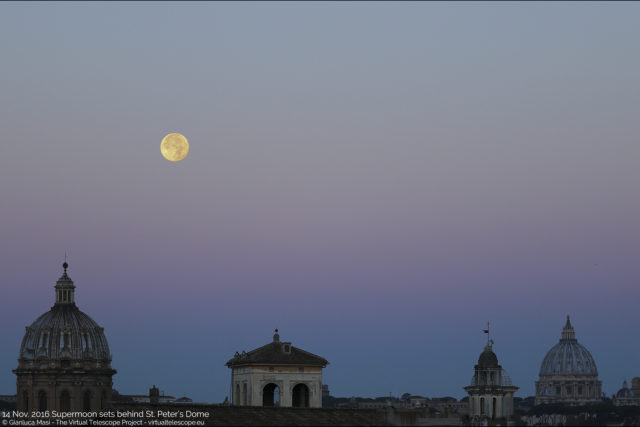 This condition is now popularly referred to as Supermoon. The term itself is of no scientific value: astronomers prefer to call it perigee full Moon, but undoubtedly Supermoon is by far a much more charming name.

Both the full and the new Moon can be “super”, as long as they occur near the lunar perigee, that is, when our satellite is at its minimum distance from the Earth. The Moon moves around our planet along an elliptical orbit, so its distance from us is not constant, but varies between a minimum (perigee) and a maximum value (apogee). Of course, the new Moon is not visible in the sky, so only the full Supermoon can be observed (unless we have a solar eclipse during the new Supermoon, as in March 2016). In 2017, we had a total of four Supermoons, but the only full and visible one will be the next 3 Dec. one, ending the 2017 cycle.

“The 3 Dec. 2017 Supermoon will appear about 7% bigger and a bit brighter than an average full Moon, but casual stargazers will not recognize this at their first glance,” says Gianluca Masi, astrophysicist, scientific director of the Virtual Telescope Project. “In fact,” Masi adds, “these are not really obvious variations, but they add charm to the event, a precious opportunity to admire our natural satellite in the night sky context, an increasingly overlooked and forgotten landscape.” 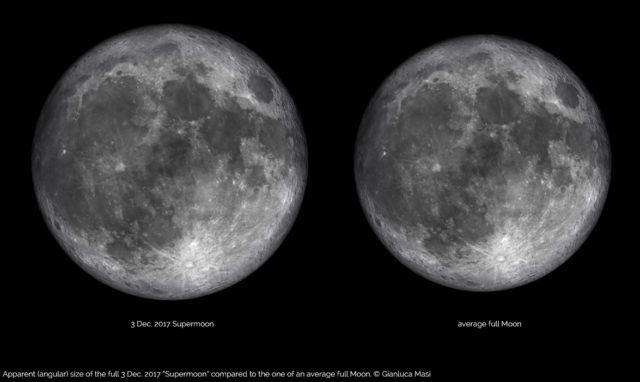 The show of the full Moon (and of course of the Supermoon) offers its best when our satellite rises or sets, which happens at sunset and at dawn, respectively (the full Moon shines in the sky on the opposite direction respect to the Sun, so it rises at sunset and sets at dawn). “During the twilight,” says astrophysicist Gianluca Masi, “the residual solar light scattered all around by our atmosphere allows us to admire the scenery, while the full Moon rises or falls on the horizon.”

“At night,” continues Masi, “the full Moon is very bright, almost dazzling, compared to the darkness of the landscape.” “At its rise”, adds astrophysicist Gianluca Masi, ” the Moon appears behind monuments and elements of the landscape, generating the feeling that its disk is larger than usual, but this is just an optical illusion, due to the presence of those terrestrial elements on the line of sight, giving grounds for comparison”.

The Virtual Telescope, thanks to its roving instruments, will show the next 3 Dec. Supermoon while it will rise above the legendary skyline of Rome, behind the most famous monuments of the Eternal City, with commentary by astrophysicist Gianluca Masi, sharing the experience with curious people from all around the world.