We have been waiting for it and now it is over: the only 2017 full Supermoon has gone, putting its show up there, with millions and millions of curious people looking at it. We shared it live with the world, both from Rome, Italy, and Arizona, USA. We captured several nice images and are happy to share them with you. 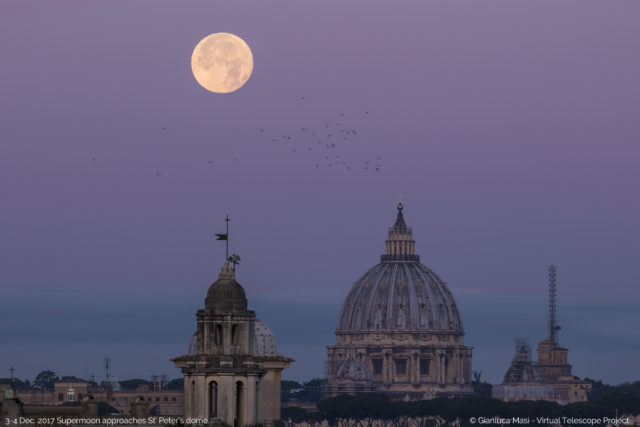 We scheduled a live feed from Rome, to show the Supermoon while rising above the legendary skyline of the Eternal City. Unfortunately, the weather was heavily cloudy and we could not see the Moon at all. We could use some archive images we had from our past, 2016 Supermoon imaging sessions. Tens of thousands of viewers enjoyed the live feed.

But forecasts said the weather could be much better at dawn, so I managed to wake up well before dawn, reaching a place from where I could see an unobstructed western horizon. Despite the very cold, windy air, I climbed the Capitoline Hill and managed to prepare the imaging setup: my heavy-duty  tripod, my Canon 7D mark II DSLR with a superb Canon EF 100-400mm f/4.5-5.6L IS II USM lens and a second Canon 7D mark II DSLR with a Canon EF-S 17-55mm f/2.8 IS USM.

The sky was almost clear, with some random clouds scattered all around, but the feeling was that the weather, this time, was with me. 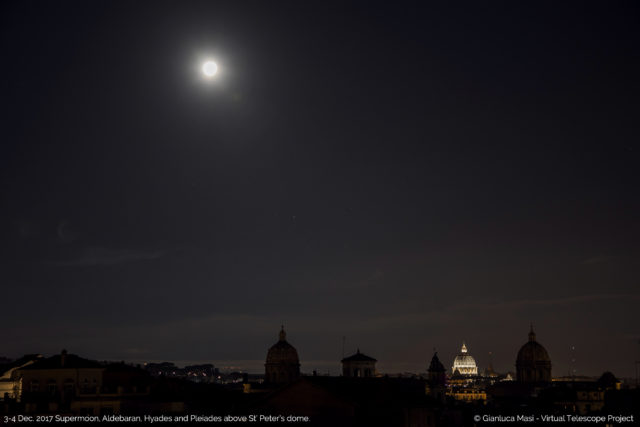 The bright Supermoon was shining above a sleeping Rome, with the star Aldebaran, Hyades and Pleiades on the background.

Despite the light pollution, I could see the red star Aldebaran and a couple of members of the Hyades star cluster. I also had the impression to see the Pleiades, but for sure these stars are well visible in the image above. You can use the annotated image below to identify those stars. 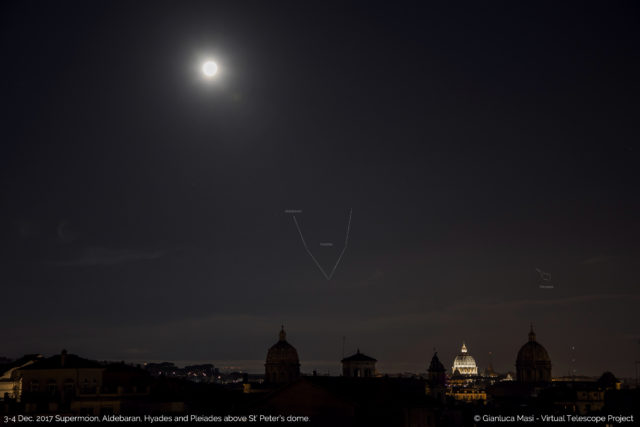 as above, but annotated with stars and star clusters

Of course, the mere Full Moon was a joy to see, with its timeless “face”. 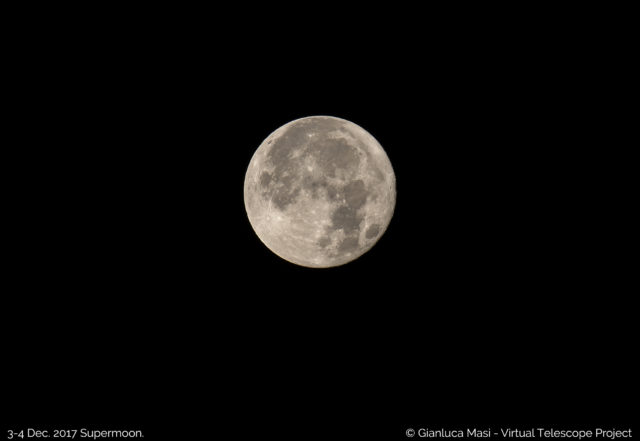 Time flies and the solar light started to flood the sky. The Earth projected its shadow on our atmosphere, with the resulting, very beautiful “Venus belt”, famous for its pink hue. This is a wonder which I always love to see. 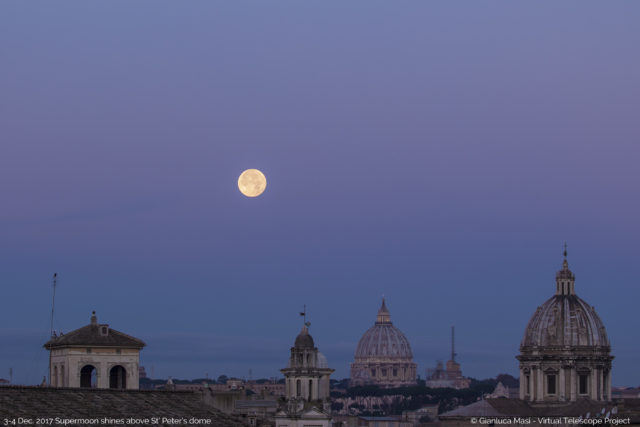 The “Venus belt”, with its pink hue, adds elegance to the sight

At some point, when the Supermoon was apparently approaching the St. Peter’s Dome below, I could use a longer focal length, perfectly framing the main actors of the shows. After all, this was something I was waiting for, after I calculated the azimuth of the dome, choosing the location to setup my equipment accordingly. 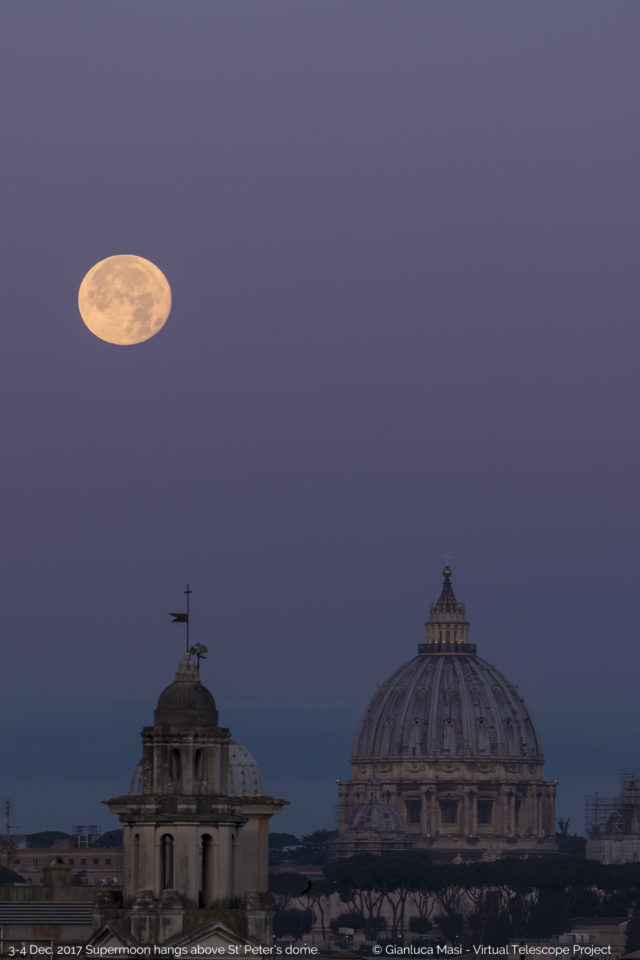 The Supermoon approaches the St. Peter’s Dome, while the Venus belt is a perfect background for the show .

But the topical moment I was waiting for happened a bit later, when the setting Moon was perfectly behind the dome’s lantern, something I have been hoping to see for years. Seeing this configuration slowly preparing was breath-taking. Meantime, the sun dressed with light the St. Peter’s Basilica and you would have stopped the time. 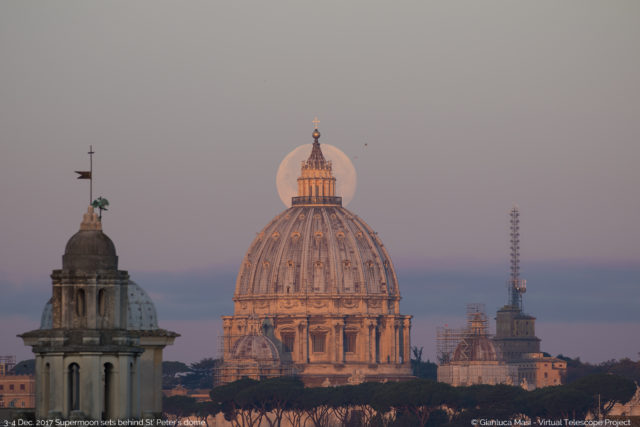 The Supermoon is perfectly behind the lantern of the St. Peter’s Dome, shining in the first light of the new day

So, while at sunset the show was “cancelled” by the heavy clouds, the view in the morning was an experience by itself. We are looking forward to show you live the next Supermoons: 2 and 31 Jan. 2018.

Below you will find both the podcasts from our live feeds from Rome and Arizona (here we used one of the robotic telescopes available at Tenagra Observatories).