Geminids meteor shower and Phaethon put on a great show: join it with the Virtual Telescope!

The Geminids meteors are ready to offer us an amazing shower, the best of this year, while their parent body, the potentially hazardous asteroid (3200) Phaethon, reaches its minimum distance from the Earth. The Virtual Telescope invites you to join our four live feeds covering these events, thanks to its own telescopes in Italy and those in Arizona, USA, available thanks to the important partnership with Tenagra Observatories. 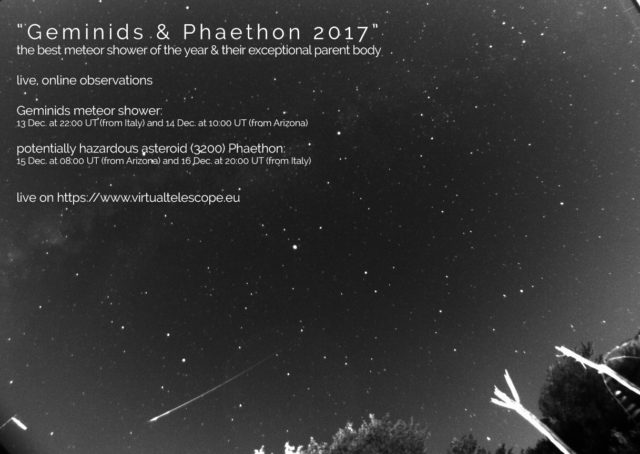 Next 13 and 14 Dec., the sky will put a great show out there: the Geminids meteor shower, one of the finest ones ever, will reach its peak of activity, offering a truly memorable show. All this under very good sky conditions, as the Moon will be not visible for almost the entire night: last August, our satellite made the Perseids meteor shower a very pale experience, flooding them with its invasive light.

Then, Geminids will be the most spectacular meteor shower of this 2017. 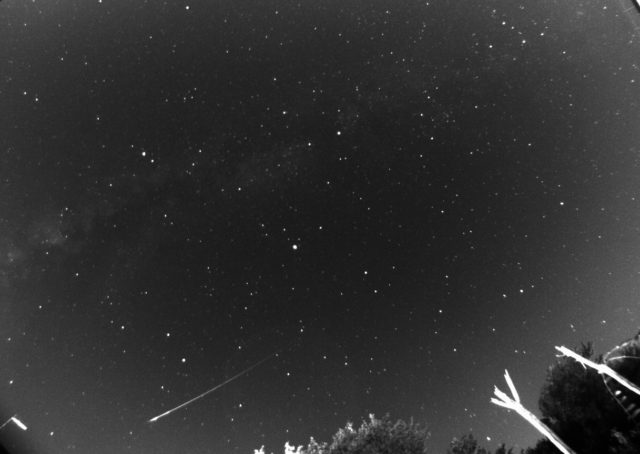 “A meteor shower”, says astrophysicist Gianluca Masi, director of the Virtual Telescope Project, “happens when the Earth crosses the intersection of its orbit with that of the parent body of the meteor shower (or comes close enough to its orbit), ‘jumping’ into the dusty cloud released by that body along its  orbit.  So, they are not stars falling down, but motes of dust of the progenitor: those grains enter our atmosphere at very high speed and burn, leaving their famous trails.

“The meteor showers we know”, adds Masi, “are usually connected with a comet: it was the Italian astronomer Giovanni Virginio Schiaparelli (the “father” of the Martian canals) to find, in the XIX Century, such a relationship”.

The Geminids shower, however, is originated by the potentially hazardous asteroid (3200) Phaethon, discovered in 1983. A very surprising connection. 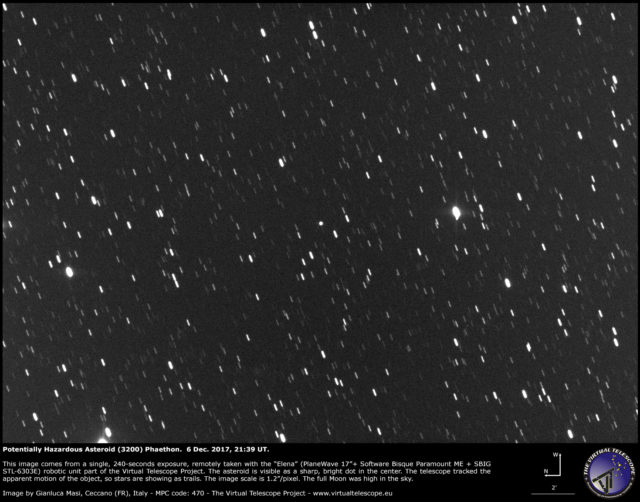 “When (3200) Phaethon was discovered in 1983, we noted that its orbit was in excellent agreement with that of the Geminids”, comments astrophysicist Gianluca Masi. This makes clear that Phaethon is the parent body of that famous meteor shower. Geminids are one of the only two meteor showers known to date to be connected with an asteroid (the other one is the Quadrantids meteor shower, active at the beginning of the year).

Explaining how an asteroid (which has not the abundant volatile material we find in comets) could made available the material needed for the meteor shower is not straightforward. “Hypotheses like the fragmentation of a previous body with creation of debris, collision between two objects and a now extinct comet do not appear to be fully satisfying”, Masi adds,  “while the idea of a rock comet is unable to explain the huge quantity of dust found in the shower cloud”.

The name of the shower comes from the position in the sky of the so-called “radiant”, that is the point from where all the trails are apparently coming: in this case, it is in the Gemini (the Twins) zodiacal constellation, an important actor in the winter sky, not far from the position of Castor, the 2nd star in brightness of that constellation. Meteors can appear even far from that point, on the entire sky, but the trails are always prospectively coming from the radiant. 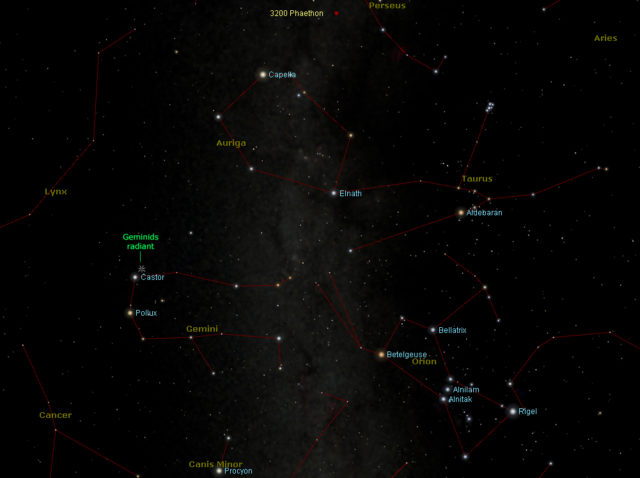 The radiant of the Geminids meteor shower, close to the star Castor

Geminids will peak on the night between 13 and 14 December. On average, we see more than one hundred shooting stars from this shower, a number making it one of the most spectacular meteor showers of the year. The best moment to observe it is the second part of the night, when the Twins constellation, hosting the radiant, will be high in the sky. Meteors belonging to the Geminids are often bright and show nice colors. If possible, it would be best to observe from dark sites, far from the city lights.

The Moon, almost New, will rise just at the end of the night, without interfering too much with the observations. So, this year will be a great one for Geminids.

“Unfortunately, the low temperatures of the season make the Geminids not as popular as they should be”, Masi says, “otherwise they would challenge the well-known Perseids as the best meteor shower of the year”.

To make this meteor shower of particular fashion and very special this year is a nice coincidence: its  parent body, asteroid (3200) Phaethon, will reach its minimum distance from the Earth on 16 December, coming at 10.3 millions of km, the closest encounter since this potentially hazardous asteroid was discovered in 1983: it was found with the IRAS satellite, being the first asteroid discovery made with a spacecraft.

Phaethon is flagged as a potentially hazardous asteroid, because it is larger than 100/150 meters (its diameter is of 5.1 km) and its orbit comes closer than 7.5 millions of km from that of the Earth: in that class, it is the 5th larger object. This passage is absolutely safe for us.

Not only this asteroid is the rare progenitor of a meteor shower, but Phaethon is also moving on an orbit bringing it in the very inner Planetary System. “The minimum distance of Phaethon from the Sun”, says astrophysicist Gianluca Masi, “is of 21 millions of km only, less than half that of Mercury, the inner planet of our Solar System”. Hence the name, after the myth of Phaethon, son of Helios, the Sun’s god. 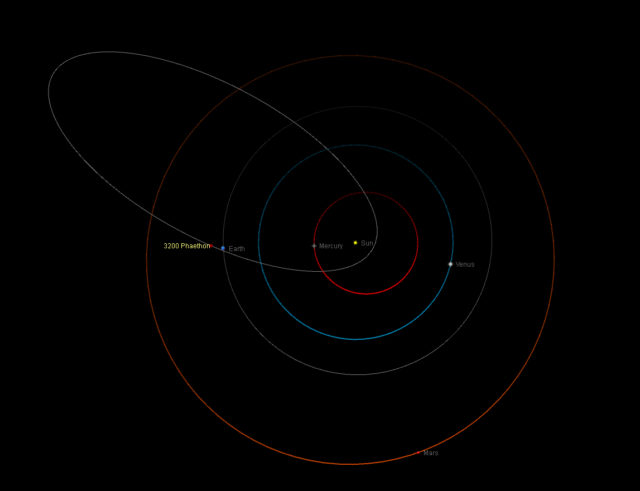 The orbit of the asteroid (3200) Phaethon

During this passage, asteroid Pheathon will be visible with mid-sized binoculars and small telescopes, so it is a very interesting opportunity for those loving the wonders of the sky. 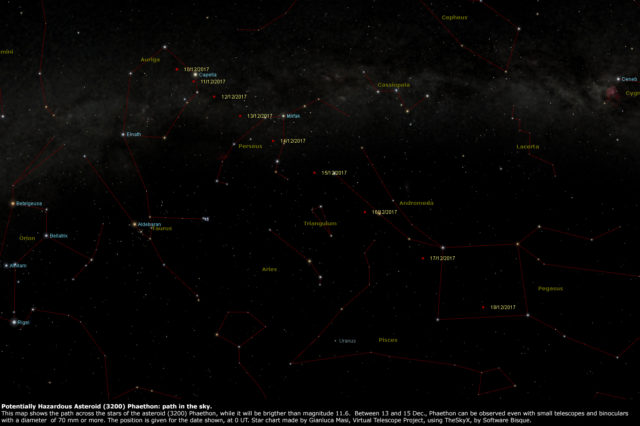 The Virtual Telescope Project will show, live, on the web, both the Geminids meteor shower and the potentially hazardous asteroid (3200) Phaethon. Exceptionally, we will use our instruments in Italy and those installed in the Sonoran desert, USA, the latter available as part of our partnership with Tenagra Observatories in Arizona: this way, it will be possible to explore the night sky in broad daylight in Europe.

The audio commentary will be provided by astrophysicist Gianluca Masi.

Each event consists of two live sessions, as in the schedule below:

You can join for free accessing, at the dates and times above, the page https://www.virtualtelescope.eu/webtv.

Back to “Star Words” page
Please wait while you are redirected...or Click Here if you do not want to wait.