Measuring the distance of (3200) Phaethon: the fashion of parallax

Measuring the distance of an asteroid with some basic mathematics is always fun. With asteroid (3200) Phaethon making a nice apparition out there, we could not resist and we exploited one of the many benefits coming from the partnership between the Virtual Telescope Project and Tenagra Observatories. Here we present the results of our parallax exercise, which are for sure of great fashion. 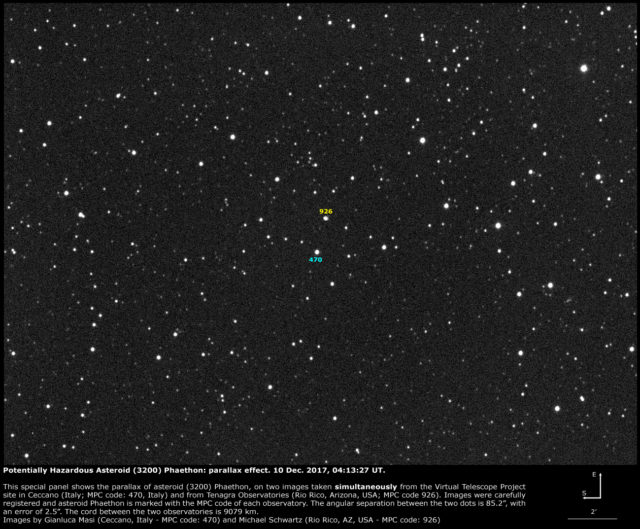 Parallax has a huge value in astronomy. It comes from the ancient Greek term παράλλαξις (parallaxis), meaning “alternation”. Simply said, it is the difference in the apparent position of an object when viewed along two different lines of sight: it is usually measured by the angle between those two lines.

We play with parallax everyday, for example when we look through the windows of a train and see how a (relatively) close object moves against the distant background. It is the basis of our 3D vision, too: our two eyes offer us two different lines of sight and if the object we see is close enough, the angle between those two lines is appreciable and our brain read it as “depth”.

Back to astronomy, parallax is a powerful technique to measure distances between us and a number of astronomical objects, stars and asteroids included. If an asteroid is your target, a very easy way to get the parallax is this: observe the same target at the very same moment from two different places of Earth, far enough to see an appreciable, measurable effect. Once you have the parallax angle, measuring the distance of the target can be done to different degrees of accuracy.

As you know, the famous asteroid (3200) Phaethon is offering right now a bright apparition up there, well placed in the sky for northern observers. And now that we are ready to show it to you, also thanks to the amazing partnership between the Virtual Telescope Project and Tenagra Observatories, we wanted to do exactly this: observe Phaethon at the same time from Italy and Arizona, measure its parallax and find its distance.

On  10 Dec. 2017, we managed to make these observations: we used the 17″ and 16″ robotic units available at the Virtual Telescope and Tenagra Observatories, respectively, and observed at the same time (within a second) asteroid (3200) Phaethon. Both the telescopes can work at the same image scale, which made our work even simpler. Images were taken with an integration time of 10 seconds. Soon after we started, a strong wind forced us to stop observing from Arizona, but we already captured a few images.

We selected one image per telescope (of course, taken at the same time!), carefully registered them to perfectly superimpose them. At that point, we merged the images, to show the asteroid as seen from Tenagra Observatories on the image captured from Italy. The resulting, final panel is shown above.

We used the Minor Planet Center’s codes to identify the asteroid dot coming from each observatory: 470 is Ceccano (Virtual Telescope), 926 is Rio Rico (Tenagra Observatories). Please note: each dot is exactly the one coming from the original image, is not a “copy & paste” of the same one.

Now, we need to know the baseline between the two observatories. Assuming the Earth to be spherical, with a radius of 6378.137 km, we get a cord length between Ceccano and Rio Rico of 9080 km.

At this point, we would need to make some corrections to get the ortogonal projection of that baseline to the asteroid direction, but for this quick exercise we assumed the entire length (this will provide an upper limit of the true distance).

JPL’s Horizon gives a distance of 21.4 millions of km.

Using accurate astrometric positions from the images, the parallax angle is 88.2″. Keeping all the approximation above, the resulting distance  is 21.2 millions of km.

We plan to go into the detailed math and accurate numbers (real distances between observatories, error bars and so on), but we wanted to share this with curious people like us as soon as possible.