On 9 Jan. 2019, the Central Bureau for Astronomical Telegrams issued an electronic telegram reporting that the inner main belt asteroid (6478) Gault had a tail. This made the object a very important target to monitor and we managed to get a few images on two nights. 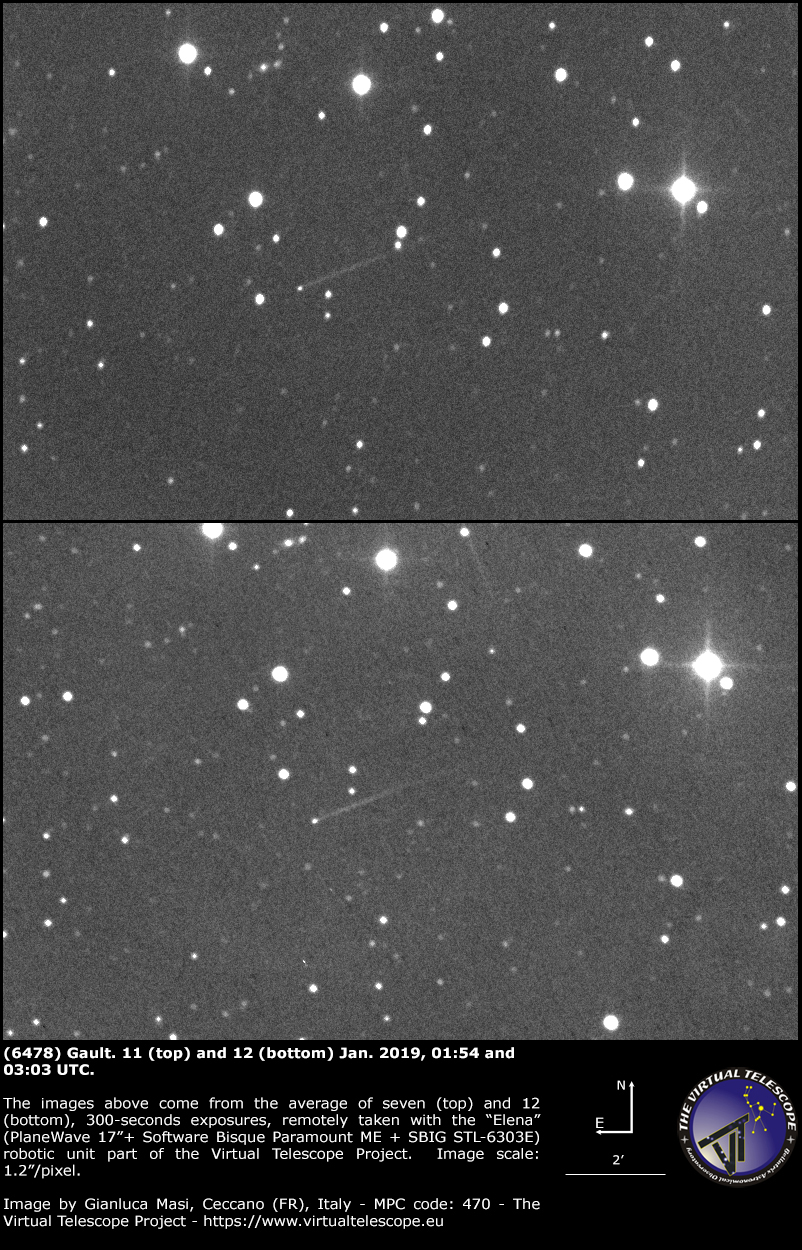 On 8 Jan. 2019, the CBET 4594 (subcription required) issued by the Central Bureau for Astronomical Telegrams reported that asteroid (6478) Gault was spotted to show an evident, narrow tail by the Asteroid Terrestrial-Impact Last Alert System” (ATLAS) team. This was a very interesting announcement, as it is rare to see an object living in the inner asteroid belt, as Gault, to show such a cometary, peculiar feature.

(6478) Gault has a typical asteroid orbit, so from this point of view we did not expect to see it wearing a tail. This behavior, among objects moving in the asteroid belt, is quite rare: those few objects living there and showing from time to time hints of cometary nature are called main-belt comets. One of them is asteroid 7968 Elst–Pizarro, perhaps the best known example of this asteroid/comet “dualism”.

As soon as we learned about this exceptional activity, we planned some follow-up via the Virtual Telescope’s robotic facility. Weather did not cooperate and we had to wait for a couple of days before the sky was clear.

The images above come from the average of seven (top) and twelve (bottom) 300-seconds exposures, unfiltered, remotely collected with the (PlaneWave 17″+Paramount ME+SBIG STL-6303E) robotic unit available at the Virtual Telescope Project. The image scale is 1.2″/pixel. Observations were not easy, but we managed to capture the tail pretty well.

Measuring the tail, we have found that on 11 Jan. it had a length of 2.9 arc-minutes, while on 12 Jan. (under better sky conditions) we measured 3.4 arc-minutes.In both cases, the tail was pointing to position angle PA = 292 deg. As far as we could see, the object’s head was stellar in its appearance.

On 12 Jan. the tail does NOT look rectilinear.

What happened there? A possible scenario is that there was a collision between Gault and another object, releasing material into space, that we see like a tail/trail. Further studies will likely help understanding this truly fascinating event.

Of course, we plan to closely monitor (6478) Gault in the next months.