I discovered asteroid (10931) Ceccano on 16 Feb. 1998,  a few months after building my observatory. It was my first asteroid discovery and my second discovery ever. Looking at it from time to time is always an emotion, here it is my latest sight, a couple of nights ago. 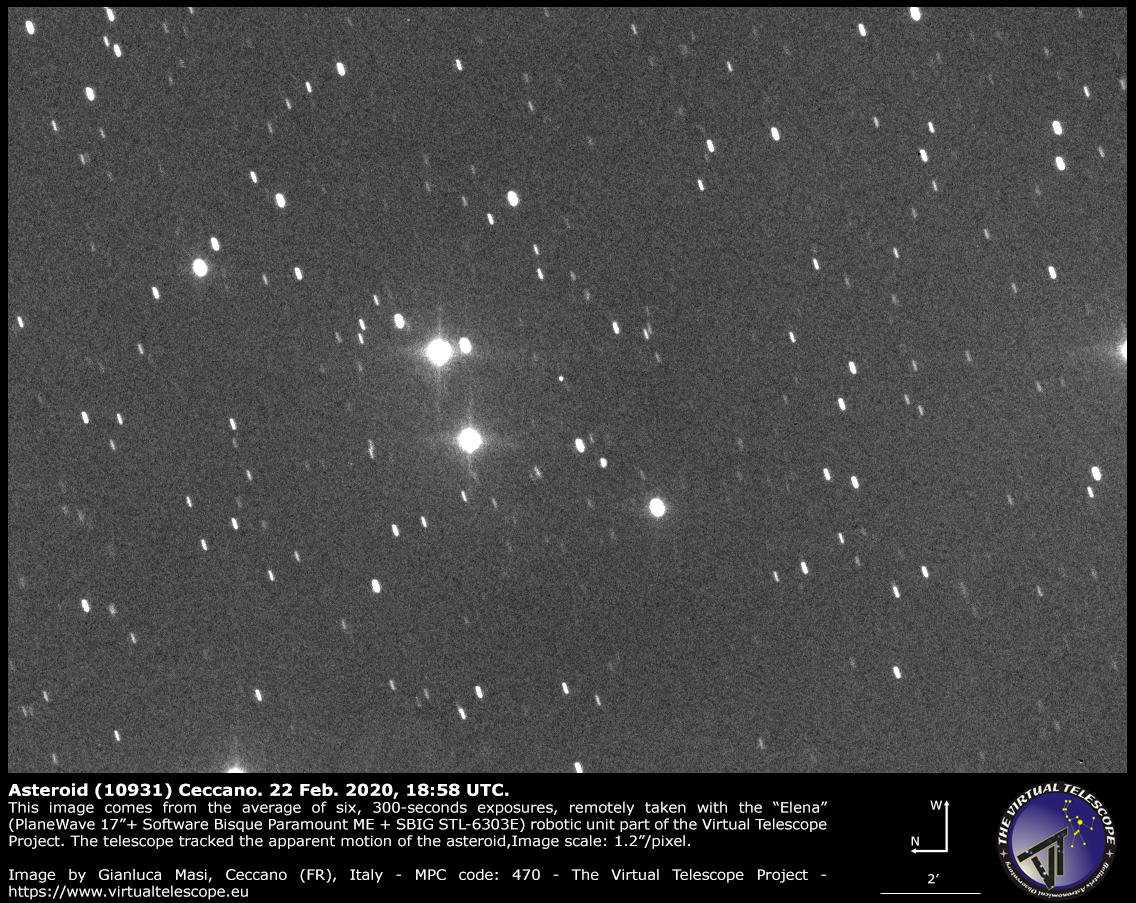 The image above comes from the average of six, 300-seconds exposures, unfiltered, remotely collected with the “Elena” (PlaneWave 17″+Paramount ME+SBIG STL-6303E) robotic unit available at the Virtual Telescope Project. The robotic telescope tracked the apparent motion of asteroid (10931) Ceccano, so stars left trails on the background, while the asteroid shows like a sharp, dot-like object in the center of the image.

I observed this asteroid for the first time on the night of 16 Feb. 1998. At that time, I just had started observing asteroids (my first observations of this kind were obtained on Sept. 1997, using my historic 150mm Newtonian reflector), quickly wishing to find a new one. Before doing so, I had to change my telescope with a larger, powerful one, installing it under a permanent shelter: this was the birth of the Bellatrix Astronomical Observatory, at least of its physical shape (that name has been used to identify the same observing site well before the building of the physical observatory). Those early asteroid observations were very important, as thanks to them I was “awarded” by the Minor Planet Center with the official observatory code “470 – Ceccano”.

On 16 Feb. 1997, while observing asteroid “Comrie”, I noticed there was another moving object in the same field of view, which was obviously another minor planet. I checked the Minor Planet Center website, learning it was new: a dream coming true! In a couple of nights I could do everything needed to get official attention for this new discovery, getting the provisional designation for the new body: 1998 DA.

Well, I risk to tell you the long version of this story, it is better I stop now. What I can add is that looking again for this asteroid was truly exciting: knowing you are the discoverer of such a big rock feels you with sentiments which are difficult to put into words. So, I prefer it will be the image to talk.