On 8 Aug. 2020, the Trans-Neptunian object (307261) 2002 MS4 occulted the star UCAC4 419-096262, offering to astronomers a unique opportunity to unveil its precious physical features. Our observing site was exceptionally close to the center of the occultation path and we had a superb coverage of the event. 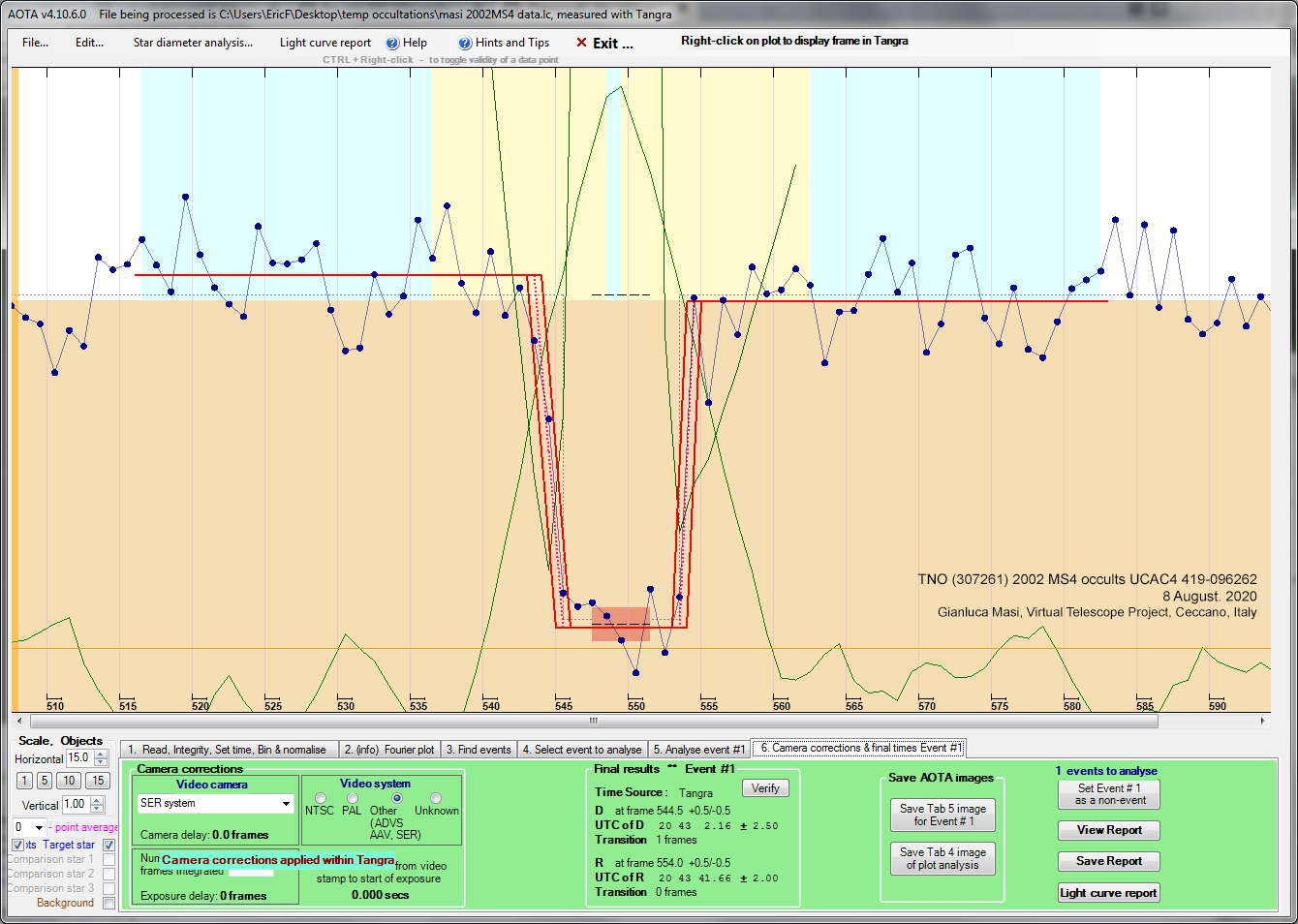 Understanding the occultation of a star by a object of our Solar System is easy. The latter moves across the sky (as it is orbiting our Sun) and, as seen from Earth, it can transit in front of a star, “covering” it for a while, so blocking the starlight from reaching us, until it will move away. After all, it is a very special eclipse. A simple, but very powerful shadowplay.

Indeed, by studying how the brightness of the occulted star changes during the event, especially from different points of the Earth, you can learn a lot about the occulting body: its size, its, shape, the existence of an atmosphere, the presence of possible satellites, rings and so on.

Occultations have been and are very precious investigating asteroids, as you can learn a lot without going there with a spacecraft: so it is a cheap, but very effective technique. That said, you can understand why an occultation of a trans-Neptunian object (TNO) is of very great value. These objects are placed in the outer Solar System, at a greater average distance than planet Neptune, which has a semi-major axis of 30.1 Astronomical Units (1 AU: the average distance of our Earth from the Sun, almost 150 millions of km). As a consequence of this huge distance, little is known about their nature, so a occultation involving a givenTNO is of particular scientific value, often the only chance you will ever have to investigate it.

In such a framework, the recent occultation by TNO 2002 MS4 of a star in Scutum received a huge attention by the international community. Specific campaigns were planned, with Italy well placed to cover the clou of the event.When I firstly checked the opportunity to observe it via our robotic telescopes, I was amazed: Ceccano, Italy, the town where our instruments are located, was very close to the central line of the event, this making it a very high priority one. In a fraction of a second, I decided to observe it.

Occultation observations are not part of our typical scientific activity, so I managed to run several tests to find the best approach to cover the upcoming one: we are all students in the astronomy game. In particular, a fast camera, capturing many images in a short period of time, hopefully with almost zero dead time between images, is important to isolate when the occulation begins/ends and many more details. These cameras are significantly different from those used for typical astronomical imaging: the latter have some dead time after each capture, needed to read out the large imaging sensor.

Of course, incredible things can happen just when your sensor is not observing: Murphy never sleeps! In other words, you must work to shorten that “blind” time as much as possible, the limit being the architecture of your camera. After intense tests, I could make my choice: instead of using the main chip of our CCD camera, I decided to go with its guiding sensor. It offered a much shorter “dead” time, significantly increasing the probabilities to spot the most critical details of the occultation.

I started the imaging session 40 minutes before the expected beginning of the occultation, covering a total of 60 minutes. The occulted star was in a very crowded star field (the Scutum constellation sits on one of the most dense areas of the Milky Way), so I was happy to find the sky quite stable, with the occulted star well visible.

It was not an ordinary observing session: As always, I was not physically present at the observatory, which is fully robotic (since 2006), but this time the funny thing was that I managed to cover the occultation while I was enjoining pizza with my family at the sea! This is the magic of the Virtual Telescope… and of a carefully planned ahead observing session!

I could see the star disappearing and reappearing in real-time, in excellent agreement with the calculated times, as for the duration of the event. The plot above summarizes what I have seen: at some point, the TNO 2002 MS4 jumped into the line of sight, occulting the star for a bit less than 40 seconds. This is an unusually long time, due to both the size and the distance/slowness of the TNO. Then, the star recovers its usual brightness. 2002 MS4 was about 100 times fainter than the star, so it was not visible in our short (3.5+0.5 seconds) exposures. All the images were remotely taken with the “Elena” (PlaneWave 17″+Paramount ME+SBIG STL-6303E) robotic unit available as part of the Virtual Telescope Project.

Using a fraction of the captured images, I managed to make this quick time-laps, showing the occultation itself. Note: the animation “speed” is 31X times faster than reality. I hope you will appreciate it.

Our data was share with the Lucky Star team in Paris and with the European Asteroidal Occultation team. A preliminary plot showing the shape of the object is available here. I wish to thank Pietro Baruffetti and Eric Frappa for the useful inputs and tips.