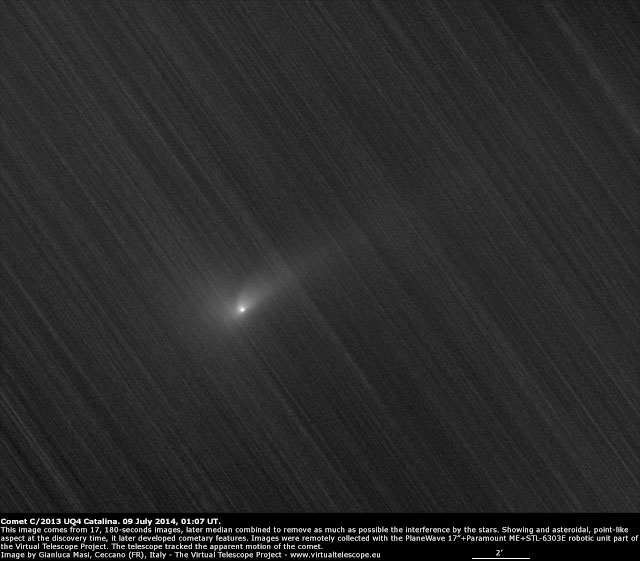 On 23 Oct. 2013, the Catalina Sky Survey in Arizona discovered a new, apparently asteroid-like object, moving on a rather cometary orbit: it received its provisional designation 2013 UQ4. This happens from time to time (and at Virtual Telescope we follow that kind of objects, to see it they display some sort of coma, unveiling soon or later their cometary nature), because faint comets can look stellar at the discovery time, developing only later their true aspect.

On May 2014, 2013 UQ4 was spotted with a fuzzy, coma-like aspect, revealing it was indeed a comet, reaching the minimum distance from the Sun (perihelion) on 5 June 2014 and the closest approach with the Earth on 10 July (at about 47 millions of km). By that time, it was expected to be accessible with small telescopes, peaking at magnitude 7.5 or so. The object is now properly called comet C/2013 UQ4 Catalina.

On 9 July 2014, soon after the bright Moon set, at Virtual Telescope the 17″ robotic unit was slewed to comet C/2014 UQ4 Catalina, while it was moving pretty fast across the stars, so the telescope tracked its apparent motion. The region of the sky hosting the comet that night was densely crowed with stars, so the 17, 180-seconds exposures were combined via median technique, to remove the stars as much as possible.

Above is the image showing this elegant comet with its nice structure of dust. We plan to cover it again, Moon and weather permitting.