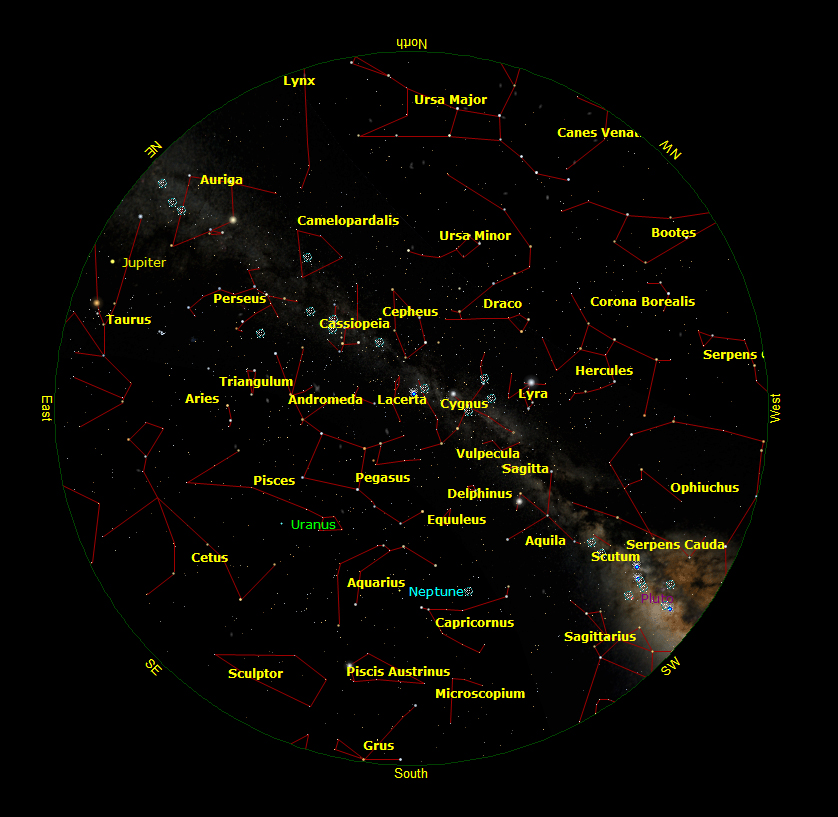 The short description below is valid for a latitude of +42 deg.

In October, after the Autumn equinox in the northern hemisphere, nights start to be significantly longer than days . This is a good benefit for those willing to spend at least a couple of hours outdoor, looking at the skies.

At the beginning of the night, the stars Vega (Lyra), Altair (Aquila) and Deneb (Cygnus) in the “Summer Triangle” are still prominent, but soon they move west, leaving the scene to the stars of the new season. The Big Dipper is reaching its minimum elevation, fighting with the haze at the northern horizon.The Polaris remains as the usual, firm reference in the sky.

Around the zenith, new constellations are climbing. Cepheus is closing the summer exhibition, pushed away by his wife Cassiopeia and her gems, while Pegasus, the winged horse, is riding across the meridian. This magnificent horse is sniffing with Enif, its nose,  the wonderful and bright globular cluster M15, easy to spot with a pair of binocular. In  Cygnus, the open cluster M39 is an easy sight, as well as the very red star Mu Cephei, known as the Herschel’s Garnet Star, for its very red hue.

Early in the evening, Delphinus is easy to recognize in the middle of the sky, looking south. Its star gamma is one of the finest and colorful double stars in the sky.

Later in the night, Andromeda and Persus will bring other interesting stars and wonderful gems, we will explore them next month.

No bright planets out there early in the night: Jupiter will rise a few hours after sunset, among  the winters stars, while Neptune and Uranus can be spotted with a small binocular or a little telescope.

The Moon will be new on Oct. 15, with dark skies for deep space observations, while the first quarter will be on Oct. 22. Full Moon is on Oct 29, last quarter on Oct. 8.

Back to “Monthly Skies”