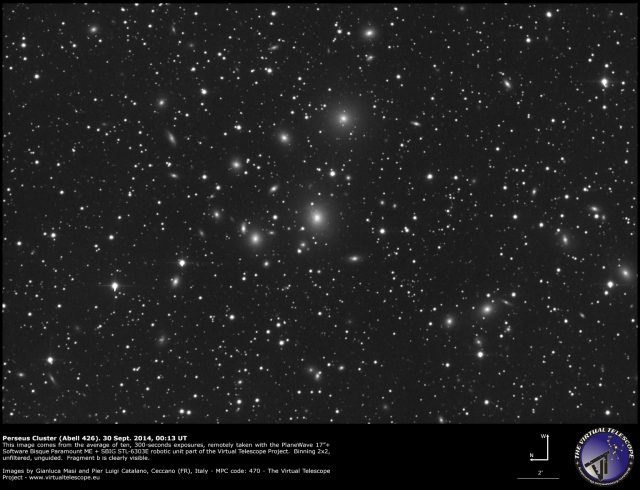 At Virtual Telescope, sometimes we like to image and share with our public something unusual, not merely pretty pictures. Recently we have found a great subject in Perseus, a typical constellation in the Autumn sky, well-known for hosting several spectacular and famous deep sky gems. But what we want to share here is less obvious and largely unknown even to people loving the Cosmos.

Suspended in space and time at about 240 millions of light years from the Earth, the Perseus Cluster, also known as Abell 426, hosts a few thousands of galaxies, merged in a very hot plasma and it is one of the most massive objects known in the Universe. Recently, this cluster was investigated by the Chandra X-ray observatory and scientists detected a signal which could not explained with any known atomic transition: so, it does not come from any known type of matter. Likely, dark matter is involved.

But the Perseus Cluster has other reasons of interest. The galaxy sitting in the center of the cluster is NGC 1275, a very peculiar one: it is a Seyfert galaxy and emits abundant radio signals, for this known as Perseus A. NGC 1275 is actually composed by two different galaxies. Another very curious discovery was made in 2003: radio waves generated by the inflation of bubbles of relativistic plasma by the central active galactic nucleus in NGC 1275 produce one of the deepest notes ever detected, a B flat, which is 57 octaves below the keys in the middle of a piano!

The image above is the average of ten, 300-seconds exposures,  remotely collected with the  PlaneWave 17″+Paramount ME+SBIG STL-6303E robotic unit part of the Virtual Telescope Project. All the images were unguided.

The Universe never fails to amaze us with its wonders.