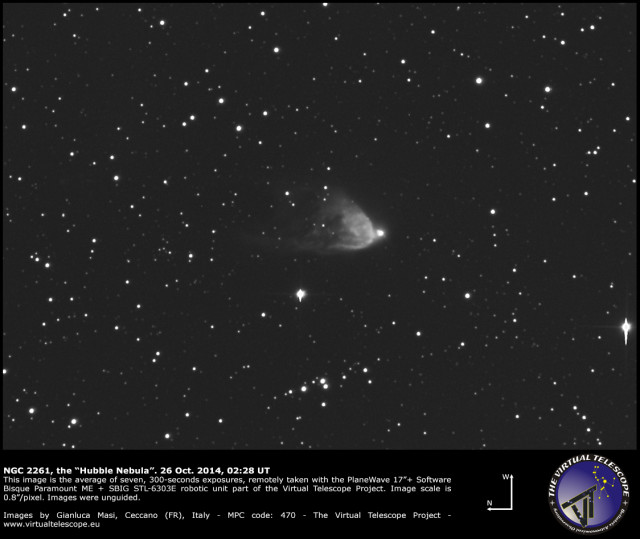 If you are familiar with comets, there is a deep sky object you would like to see. It is the NGC 2261 nebula and the reason is its shape. That is not all: as a comet changes continuously, this nebula varies its aspect and brightness over the time.

Discovered in 1783 by W. Herschel, NGC 2261 is also named the “Hubble nebula” after E. P. Hubble, who investigated its variable nature, once he discovered this behavior in 1916.  Also, in 1949 this nebula was the “first light” of the glorious 200 inch Mt. Palomar telescope, by the hand of Hubble himself.

Normally, nebulae do not show such a variability. NGC 2261 is a special case and its secret is in the star placed in its southern extreme. That star is R Monocerotis, a young variable one, which light is reflected by the matter of the nebula. Dense clouds of dust moves around the star, casting shadows out into the nebula, making it variable. NGC 2261 is placed at about 2500 light years from us.

The image above is the average of seven, 300-seconds exposure, remotely collected with the  PlaneWave 17″+Paramount ME+SBIG STL-6303E robotic unit part of the Virtual Telescope Project. All the images were unguided; the resulting scale is 0.8″/pixel.