Maffei 1 and Maffei 2: an interesting couple of galaxies 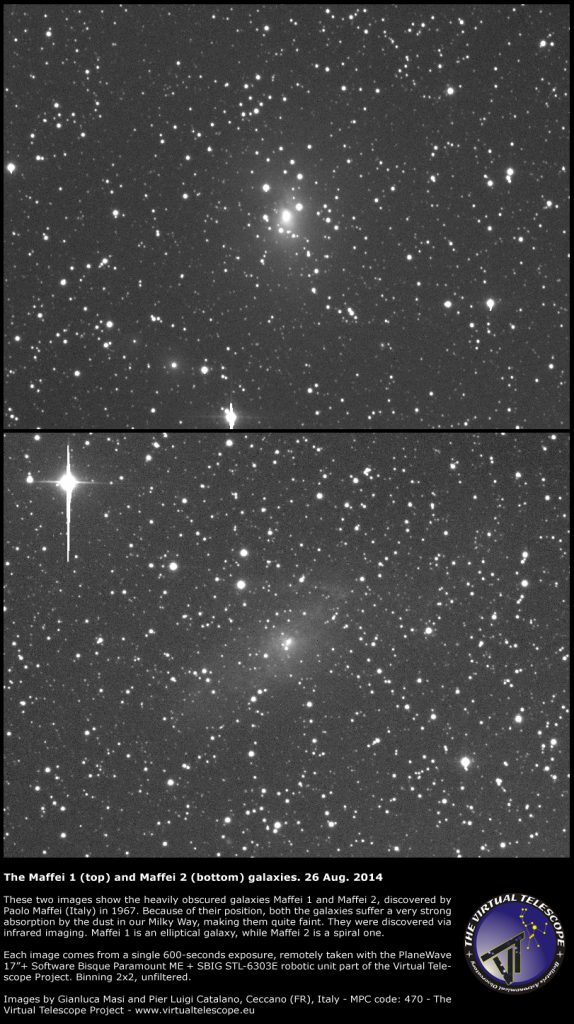 If there is a couple of relatively close galaxies that you have never seen, likely they are Maffei 1 and Maffei 2. While they are closer than 10 millions of light years (well, that is not exactly around the corner), they are much harder to see than you would expect.

The reason is their location in the sky: they are placed in a zone where our Milky Way is very prominent, with lots of stars and dust. Both those stars and dust are a severe obstruction for the light from something behind them and directed to us: that light is heavily obscured, to the point that the original object, potentially bright and spectacular, can be barely visible or completely invisible.

Both Maffei 1 and 2 were discovered in 1967 by Paolo Maffei (1926-2009), an Italian astronomer pioneering infrared imaging, a technique which made possible for him to spot both those galaxies. At infrared, the adsorption is much less strong, so they were recorded on the plates.

Maffei 1 (aka PGC 10217), an elliptical galaxy, was discovered on 29 Sept. 1967 and in 1970 its was suggested to be a galaxy and not a galactic source. Maffei 2 (PGC 9892), a spiral galaxy,, was found during the same campaign, while Maffei was looking for T-Tauri stars and diffuse nebulae. Their distance is estimated around 9.2 millions of light years: Maffei 1 would be in the top 10 of the brightest galaxies, if not so obscured. They belong to the IC 342 – Maffei group.

Both the images come from a simple, single 600-seconds exposure, remotely collected with the  PlaneWave 17″+Paramount ME+SBIG STL-6303E robotic unit part of the Virtual Telescope Project.