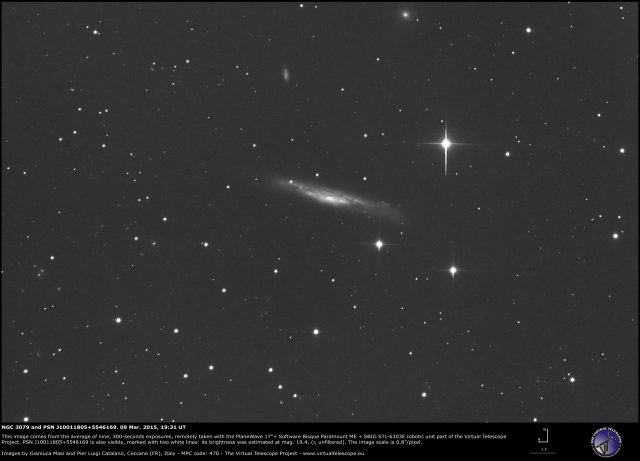 There are things that never fail to show they are true. One of them is that every time you slew a telescope to an apparently anonymous patch of the sky, following up a faint supernova candidate or a pale GRB afterglow, you never know what you will find around it.

This is what came to mind while doing some follow-up of the supernova candidate PSN J10011805+5546169, discovered in an unnamed galaxy and shining around mag. 19.5. As soon as the first image was downloaded, we noticed that a few arc-minutes far from the PSN nominal position there was a stunning, almost edge-on and barred spiral galaxy, with an highly detailed structure and plenty of details: NGC 3079. This cosmic island is placed at about 50 millions o flight years from us, lurking within the Ursa Major constellation.

This image above comes from the average of only nine, 300-seconds exposures, unfiltered, remotely collected with the  PlaneWave 17″+Paramount ME+SBIG STL-6303E robotic unit part of the Virtual Telescope Project. exposures were unguided and the scale of the image shown above is 0.8″/pixel.

Back to “galaxies” page