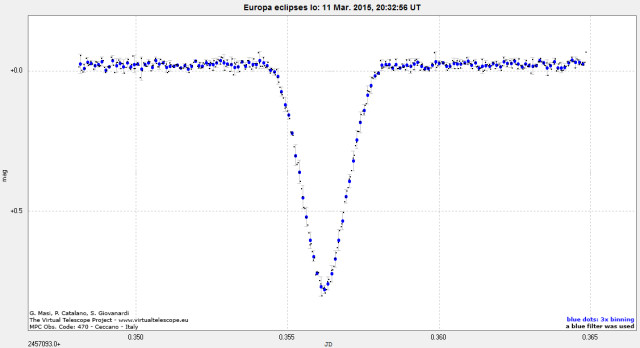 While we are all waiting for the next 20 Mar. solar eclipse, another world is showing amazing shadow plays: Jupiter and its satellites. While eclipses on Jupiter by its moons are quite common, what is not frequent are mutual eclipses and occultations among the satellites themselves. This happens every six years, at Jupiter equinoxe: it occurred last 5 Feb. so we can observe a number of spectacular mutual phenomena. There is a specific international campaign ongoing.

On 11 Mar. 2015, the moon Europa was expected to eclipse Io, with a drop of more than 0.7 magnitudes. At Virtual Telescope we wanted to observe it, after very positive results from the 2009 previous campaign. For this, we remotely used  the Celestron C14 + Paramount ME + SBIG ST8-XME robotic unit part of the Virtual Telescope. We started at 20:21 UT (the eclipses was expected to start at 20:29:50  to end at  20:36:10, both UT), stopping images at 20:45 UT. A total of 425 frames was obtained, each integrated for 1 second; a blue filter was used to limit the otherwise too strong brightness of Europa and Io.

The diagram above plots the relative brightness evolution of Io (the eclipsed body) vs Europa (the eclipsing object, used as reference star), making very apparent the eclipse itself: there was a drop of light of almost 0.8 magnitudes. The lightcurve is extremely good, with error bars of 0.01/0.02 mags., very good for such very short integration times.

Below is a video showing frames collected from to 20:27 to 20:40UT, where Io is clearly seen fainting and re brightening.