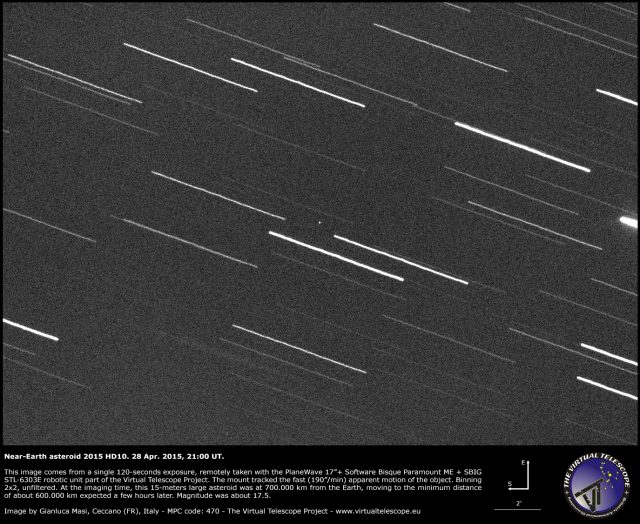 These very minutes, the near-Earth asteroid 2015 HD10 is safely brushing our planet from a distance of 600.000 km, 1.6 times the average distance of the Moon.

This 15-large minor planet was discovered on 21 April from Cerro Tololo Observatory in Chile. At  that time it was quite faint (mag. 22.5-22.0).

As as soon it was officially announced, at Virtual Telescope we planned a live, public event covering it. A few hours before the online feed, we captured it.

The image above is a single 120-seconds exposures, remotely taken with the PlaneWave 17 + Paramount ME + SBIG STL-6303E robotic unit part of the Virtual Telescope. The robotic mount tracked the fast 190″/minute apparent motion of the asteroid, so stars are trailing, while the asteroid is perfectly tracked and visible as a sharp dot of light at the center of the image. At the imaging time it was at 700.000 km from the Earth

At the imaging time, this ~20 meters large rock was at about 1.1 millions of km from the Earth and getting closer for its safe fly-by.