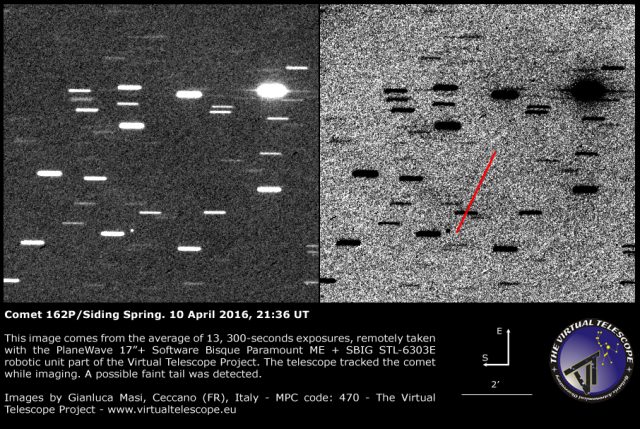 Last night, at Virtual Telescope, we wanted to observe this object again, expecting it as a mere dot of light, as the first time Masi et al. observed it. Interestingly, in 2004 the tail suddenly appeared only later, so there was still a chance to find it there, again.

The image above comes from the average of 13, 300-seconds exposures, unfiltered, remotely collected with the  PlaneWave 17″+Paramount ME+SBIG STL-6303E robotic unit part of the Virtual Telescope Project. Binning 2×2, with a resulting scale of 1.2″/pixel. The robotic telescope tracked the apparent motion of the comet, so stars left trails on the background. A possible faint tail is detected, better visible in the negative, equalized palette on the right, with PA=65 deg. Of course, because of the very poor signal-to-noise ratio, follow-up observations are desirable.

A detailed post about this object will follow later this month, with some history and past observations.