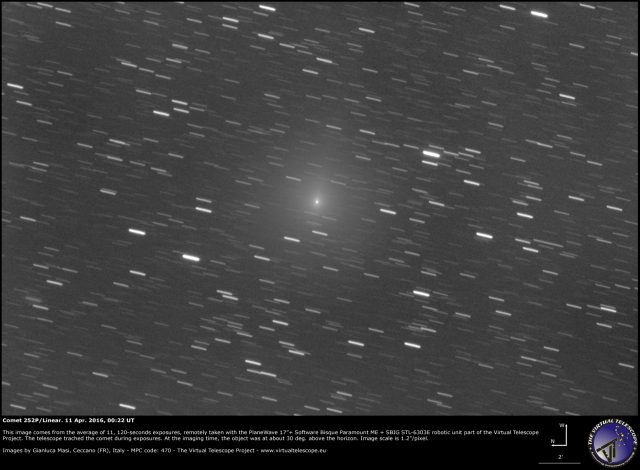 Comet 252P/Linear has been and still is a well observed comet out there, while on the way to its fly-by with the Earth last 21 Mar. and now that it is leaving us. Despite its motion is bringing it far from us, this object is still a rewarding sight with a binocular, under good skies. It is worth to remind that this comet is, quite likely, the parent of the smaller one P/2016 BA14 Panstarrs, which made history on 22 Mar. with its record, 3rd closest ever flyby with our planet.

At Virtual Telescope we finally managed to capture some data for comet 252P. The image above comes from the average of 11, 120-seconds exposures, unfiltered, remotely collected with the  PlaneWave 17″+Paramount ME+SBIG STL-6303E robotic unit part of the Virtual Telescope Project. Binning 2×2, with a resulting scale of 1.2″/pixel. The robotic telescope tracked the apparent motion of the comet, so stars left trails on the background. The target was at about 30 deg above the horizon during the imaging session.

The resulting frame was very carefully processed with a non-linear stretching, to extract any possible feature in the inner coma, at the same time avoiding any further filtering, with the exception of a gentle unsharp masking for the false nucleus. Overall, the image provides a very natural view. A tail is obviously leaving the central condensation to East, as confirmed by large field of view images. We are quite happy with this result.