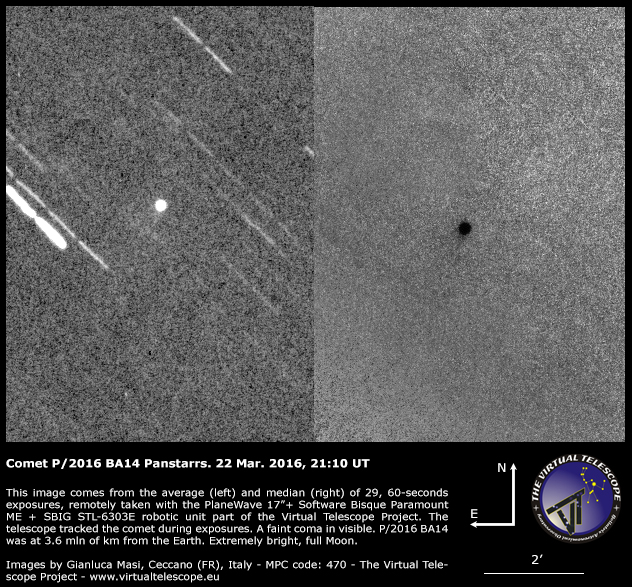 After several nights of coverage, waiting for its flyby, finally comet P/2016 BA14 Panstarrs touched its minimum distance from us: 3.5 millions of km, making it the third comet ever in history coming so close.

At Virtual Telescope we planned two online, observing sessions, to share such a very rare event with the world. Both of them turned out to be truly spectacular ones.  A total of more than 50.000 individuals joined our webcasts and we were lucky to have clear skies on both nights.

We also succeeded detecting a coma around this object. It was not easy, as the Moon was full and there were always clouds around. The image above comes from the average (left) and median combining (right) of 29, 60-seconds unfiltered exposure, remotely collected with the  PlaneWave 17″+Paramount ME+SBIG STL-6303E robotic unit part of the Virtual Telescope Project. The telescope tracked the apparent motion of the object (48″/min) during the exposures. At the imaging time, a 99.6%, extremely bright full Moon was high in the sky, 38 deg. away from the target. Comet P/2016 BA14 was at 3.6 millions of km from us. A faint, elongated coma and small tail are visible, underlining how this object is really a comet. Likely, it is a fragment of comet 252P/Linear.

Below are the podcasts from both our live webcasts.