Finally it arrived, the long awaited 14 Nov. 2016 Supermoon. It did not fail to capture those who tried to observe it, facing the clouds and other weather issues. At Virtual Telescope, we showed it live, capturing some stunning images at the end of the night. 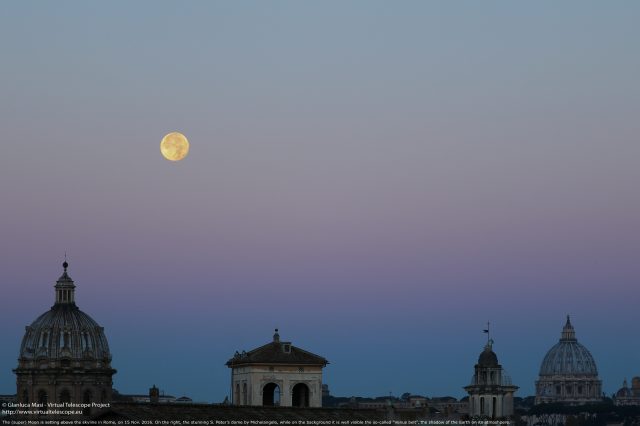 The Supermoon is setting at dawn, with the Earth’s shadow clearly visible on the bottom – 15 Nov. 2016

As astronomers clearly said  (this time, as for every past so-called “supermoon”), nothing weird was going to happen up there, other than a lunar disk a bit larger and brighter than usual. But in the name of the Queen of the night, billions of eyes looked up, above the horizon, grabbing its fascinating light, a unique opportunity to invite to seek for the beauty of the sky those who often forget its silent and moving presence.

The live coverage provided by the Virtual Telescope was a huge success, followed by about 100,000 viewers from all around the planet. For the first time, we offered an outdoor live streaming, outside our observatory, choosing an exceptional location: the Gianicolo hill in Rome. The stunning scening point above the Roman roofs is perfectly facing east, so being a great choise to see the majestic full Moon rising above the legendary monuments of Rome. 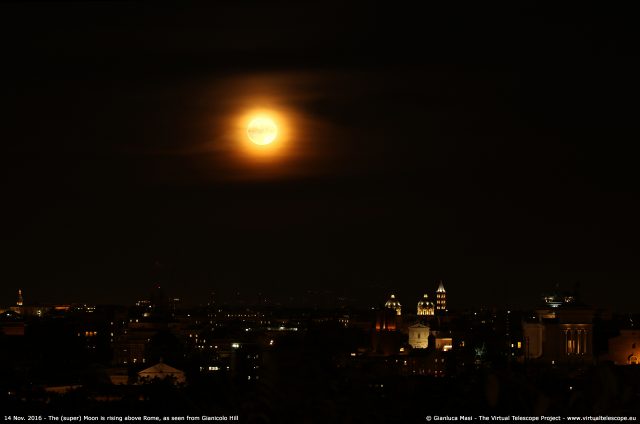 The Supermoon rises above the east horizon from the Gianicolo hill, in Rome: the “Altare della Patria” and the “Ara Coeli” are clearly visibile – 15 Nov. 2016

For about one hour after sunset, the Moon was covered by clouds, only later they gave us a chance to look at it bitter, but never completely unveiling our satellite. This made the vision more elegant and unusual. During our live feed, we saw tens of individuals handling their own binoculars and cameras to capture their very own supermoon. It is amazing to see how an astronomical phenomenon, without producing anything strange, if correctly shared with the community can motivate people to go out in the field and have their rendez vous with the stars. 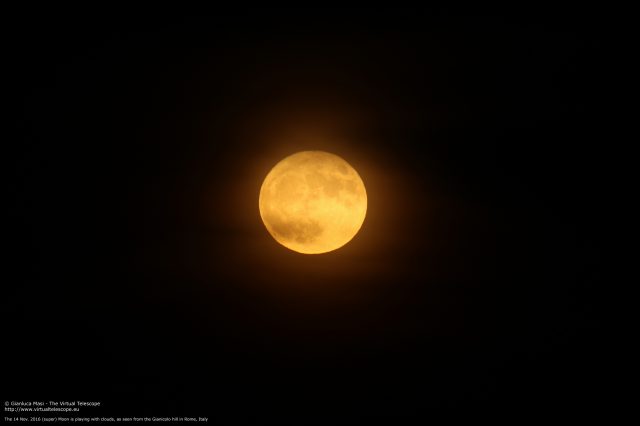 Later, clouds covered the whole sky, forcing us to stop observing. But it was only a “see you later”. 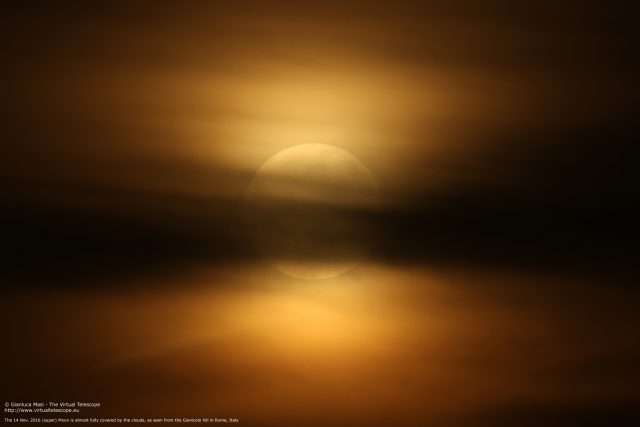 Weather forecasts for Central Italy said that the sky could be much better for the second part of the night. So, I decided to make real an old idea: image the setting full Moon beside the celebrated S. Peter’s Dome in Rome.  I woke up at 04:30am and reached another legendary place in Rome, the Capitoline hill.

The sky was simply excellent. I managed to setup my heavy-duty  tripod, my Canon 7D mark II DSLR and the superb Canon EF 100-400mm f/4.5-5.6L IS II USM lens, the same I used for the evening session.  I grabbed several sequences, to grasp at its best what captured my imagination. 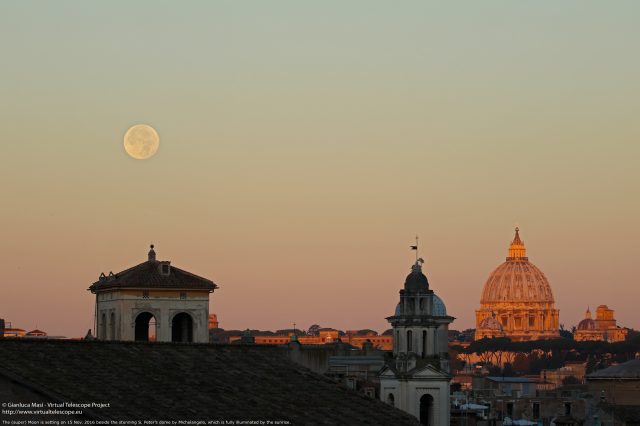 In the increasing daylight, the lunar disk looked so beautifully ephemeral, approaching the skyline, making the view extremely precious. A casual observer could easily miss the Moon, while it was still there, but very close to the horizon. 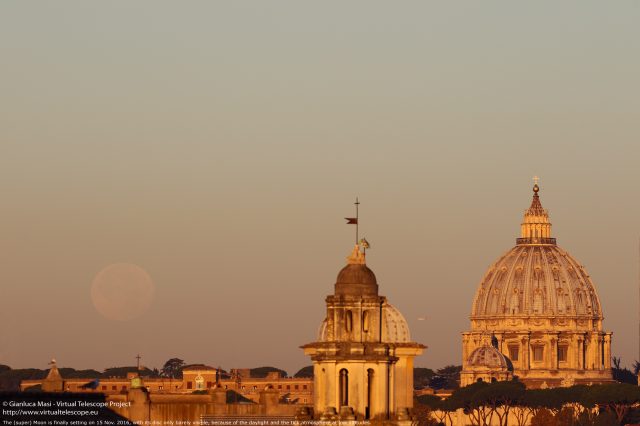 Ready to set, the Supermoon says goodbye after an unforgettable show – 15 Nov. 2016

Saying goodbye to the Queen of the night was hard, but, after all, the Moon was extremely generous with us, with plenty of emotions, so we could see it leaving with no regrets. Next Dec. 2016, we will have another Supermoon, not extreme as this one, which will be surpassed only in 2036.

This will make our memories from last night even more precious.

Below you can find the recording from our live feed.

Time-lapse with the Sun rising above the S. Peter’s Dome