On 10 February 2017, a new fragment of comet 73P/Schwassmann-Wachmann has been discovered. It is now known as 73P bt. This comet is used to fragmentation, as we know especially after its 2006 passage. 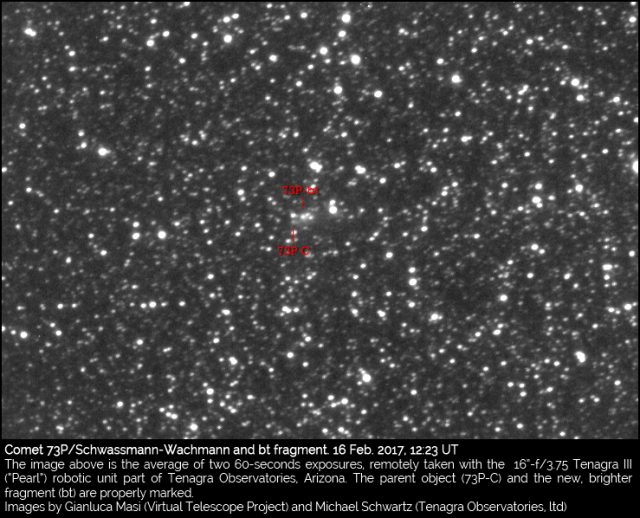 The image above shows this new fragment (labelled “bt”), which is obviously brighter (in outburst) than the parent body (C). Comet 73P/Schwassmann-Wachmann will reach perihelion next March.

The image above comes from the average of two 60-seconds exposures, unfiltered, remotely taken with the 16″-f/3.75 Tenagra III (“Pearl”) robotic unit part of Tenagra Observatories in Arizona. The observatory is placed at 1300 meters above the sea level, in the Sonoran desert, providing one of the best skies in the world. This image is the first one coming from a cooperation between the Virtual Telescope Project and Tenagra Observatories, ltd, which will be announced soon.

At the imaging time, the comet was only  about 10 deg. high above the horizon and a 70% bright Moon was high in the sky. Despite all this, the objects are well visible.