The near-Earth asteroid 2017 GM was discovered by the Mt. Lemmon Survey in Arizona (USA) on 3 April 2017 and in a couple of hours it will safely come as close as 16.000, that is 0.04 lunar distances. Our observations helped determining its orbit. 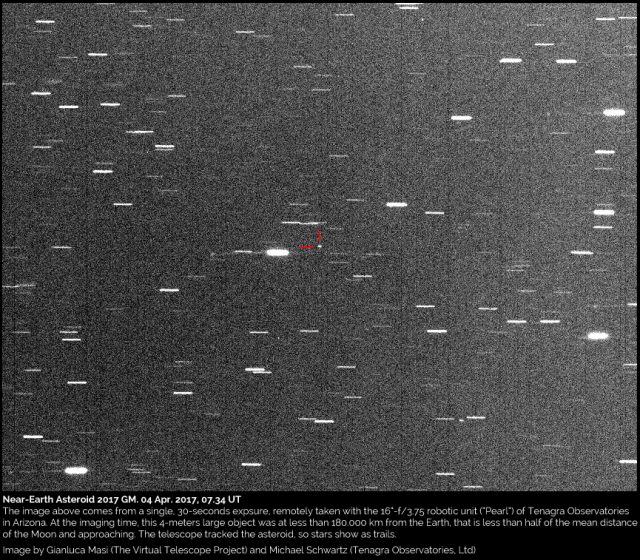 We captured 2017 GM while it was safely approaching us. For this, we remotely used a telescope in Arizona, made available to the Virtual Telescope by Tenagra Observatories, Ltd. Above is an image coming from a single 30-seconds exposure, unfiltered, taken with the 16″-f/3.75 Tenagra III (“Pearl”) unit.  The Paramount MEII robotic mount tracked the fast apparent motion (150″/minute) of the asteroid, so stars are trailing. The asteroid is perfectly tracked: it is the sharp dot in the center, marked by two red lines. On 04 Apr. 2017. at 10:31 UT, this ~4 meters large rock will reach its minimum distance from us of about 16.000 km, that is lass than 1/20th of the mean lunar distance. It is among the ten known asteroids making the closest approach ever.