This evening, it was possible to see from Rome the International Space Station (ISS) doing a wonderful transit, ending its trail a few degrees away from planet Jupiter. It was a truly outstanding experience. 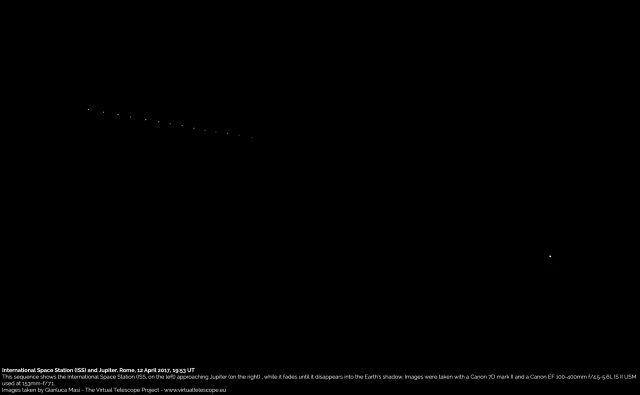 I planned a last-minute, quick imaging session, because of the short time I had to prepare everything. Imaging these quickly evolving events is not easy, especially when you reach your observing site just minutes before.

I reached Villa Borghese in Rome with one of my Canon 7D mark II DSLR and an amazing Canon EF 100-400mm f/4.5-5.6L IS II USM lens. I also had a sturdy tripod, to support that heavy setup and waited for the International Space Station to show. I decided to concentrate to the end of the transit, when the ISS would entered the Earth’s shadow, a few degrees from Jupiter. I had only a few minutes to focus the lens and choose the focal length to use to cover both the objects at that very critical lapse of time.

I saw the ISS appearing on NW, as scheduled, and tracked it while it climbed the sky, getting brighter and brighter. Then it moved east, where Jupiter was waiting.

As soon as it showed in the DSLR’s finder, I started shooting, capturing several frames before the ISS disappeared. Later, I merged all the frames and the resulting image is above. It is amazing to see how the International Space Station faded, also changing colors to a much more red hue. Jupiter is on the right.

The night sky is always rewarding and the ISS transits are of great fashion, especially when they involve something more, like the king of the planets, the giant Jupiter.