On 20 April 2017, the GAIA mission reported the discovery of a faint transient, not far from the nucleus of the stunning spiral galaxy Messier 63. Later, it was confirmed to be a supernova, labeled SN 2017dfc, but much more distant than the apparent host galaxy. 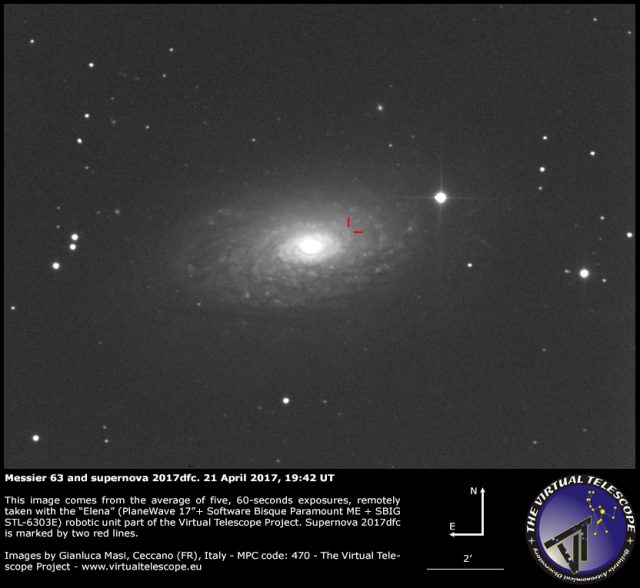 The alert referred to observations dated 9 Apr. 2017, so it was interesting to see if at that time the possible supernova was just rising or what. Of course, it it even was a supernova! The first reports said the transient was still there, with no much different brightness: quite puzzling. On 21 Apr. 2017, a spectrum was reported, suggesting it was a type Ia supernova close to its maximum. The interesting thing was that the spectrum indicated a redshift z=0.06, while the redshift of Messier 63 is z=0.0016 . This indicates the supernova is well beyond (almost 900 millions of light years) that galaxy (placed at about 30 millions of light years). A very intriguing event.

The image above is the average of five, 60-seconds exposures, remotely taken with “Elena” (PlaneWave 17″+Paramount ME+SBIG STL-6303E) robotic unit available at Virtual Telescope. We measured a magnitude of 17.7 (unfiltered).