Despite the extreme observing conditions, we could capture comet C/2017 E4 Lovejoy again, obtaining a precious documentation of its fate. 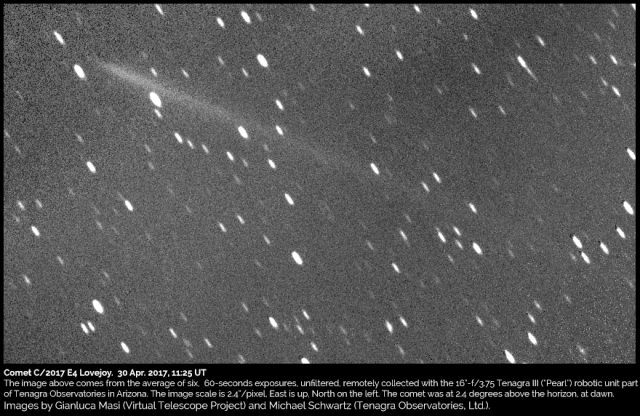 The image above comes from the sigma clipping combination of six, 60-seconds exposures, unfiltered, remotely taken with the 16″-f/3.75 Tenagra III (“Pearl”) robotic unit part of Tenagra Observatories in Arizona.  The imaging camera is based on the KAF-16801 CCD, used in 2×2 binning. The resulting image scale is 2.4″/pixel.

We must admit we were not sure to get something, when we slewed the telescope to this target, which was indeed LESS THAN TWO DEGREES above the North-Eastern horizon, at dawn. Of course, image quality is heavily affected by this, but we can see the comet, after its nucleus disintegrated and after one week from its perihelion.

So far, we obtained an outstanding coverage of this comet, as our image collection easily shows.