You surely remember when, last Feb., seven Earth-sized planets were announced to orbit the star nicknamed Trappist-1, with three of them inside the so-called habitable zone. Further studies suggested a less favorable scenario, mainly because of the star hosting the planets, Trappist-1. 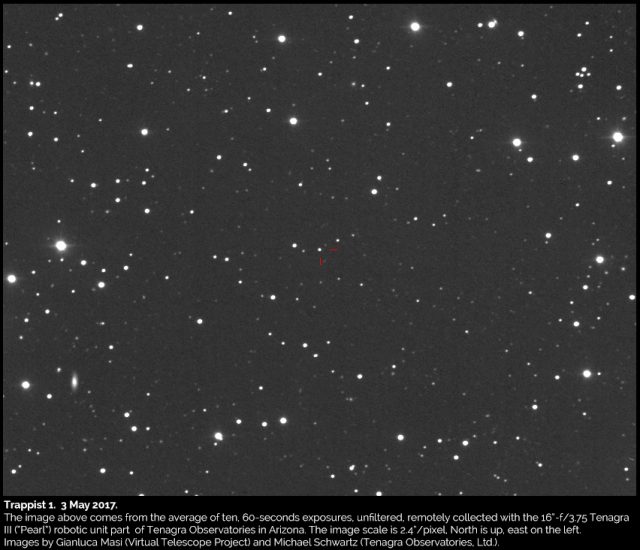 Trappist-1 is an ultracool dwarf star, placed at about 40 light years from us. It has a mass which is only 8% that of our Sun, being only marginally bigger than planet Jupiter. Unfortunately, the star shows frequent flares, which probably alters the atmospheres of the orbiting planets, making life there less obvious.

The image above comes from the average of ten, 60-seconds exposures, unfiltered, remotely taken with the 16″-f/3.75 Tenagra III (“Pearl”) robotic unit part of Tenagra Observatories in Arizona. The imaging camera is based on the KAF-16801 CCD, used in 2×2 binning. The resulting image scale is 2.4″/pixel.

Trappist-1 is marked there with two red lines. Looking at that tiny dot of light and thinking its is hosting seven small planets, among the most interesting ever discovered, is mind blowing.

The observatory hosting the telescope is placed at 1300 meters above the sea level, in the Sonoran desert, providing one of the best skies in the world. This image comes from a cooperation between the Virtual Telescope Project and Tenagra Observatories, Ltd., which will be announced soon.