NGC 6818 – a little gem in the heart of Sagittarius

NGC 6818, also known as “Little Gem”, is a small planetary nebula located in the constellation of Sagittarius: placed at about 6.000 light years from us, it is easy to see with small telescopes. It was discovered by William Herschel in 1787. 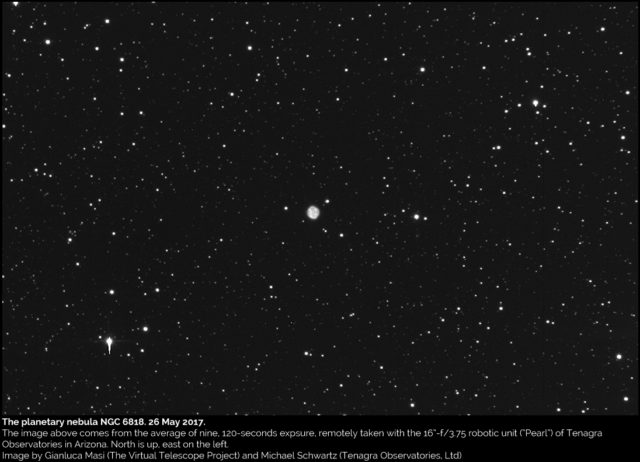 Planetary nebulae are called this way because of the great British astronomer Herschel: he believed they could be forming planetary systems. Of course, today we know they are something completely different: they represent the final stage in the life of Sun-like mass stars, not enough to die with the cataclysmic explosion of a supernova. There are a few thousands of them in our Milky Way and each of them is very remarkable because of its beauty and fashion: they look all different, you are never tired to observe or image them.

William Herschel described NGC 6818 as “similar to a planetary disk, with four satellites orbiting around it” and, as we will see, observing it with a telescope you will have exactly that impression.

The image above comes from the sigma-clipping combination of nine, 120-seconds exposures, unfiltered, remotely taken with the 16″-f/3.75 Tenagra III (“Pearl”) robotic unit part of Tenagra Observatories in Arizona. The imaging camera is based on the KAF-16801 CCD. The resulting image scale is 1.2″/pixel.

The writer could observe and appreciate NGC 6818 with his 16″ Dobson, describing it this way: “While the field of view is not rich of bright stars, I can find it immeditly. With 65X magnification, it looks like a small ring of smoke, placed in a beautiful starry field. But increasing the magnification, up to 365X, the object really stands out, showing its ring shape, quite uniform, but moderately elliptical. I clearly see three of the four “satellites”, which are of course stars of the field,  around magnitude 15. Sometimes I can possibly see the forth “satellite” of this “planet”, described by many observers as a “little green Mars”. Extremely intriguing, also, is the idea of seeing a preview, from first class seats, of the fate of our star, the Sun, in a few billions of years by now.

I finish the observation with a final appreciation of NGC 6818: “It is such a stupendous and charming view; with 365X, the planetary nebula is still bright and shows an appreciable dimension, making possible to enjoy much better its ring shape. Now I see it clearly greenish”, thinking how well its  “Green Mars Nebula” nickname fits to  what I see.