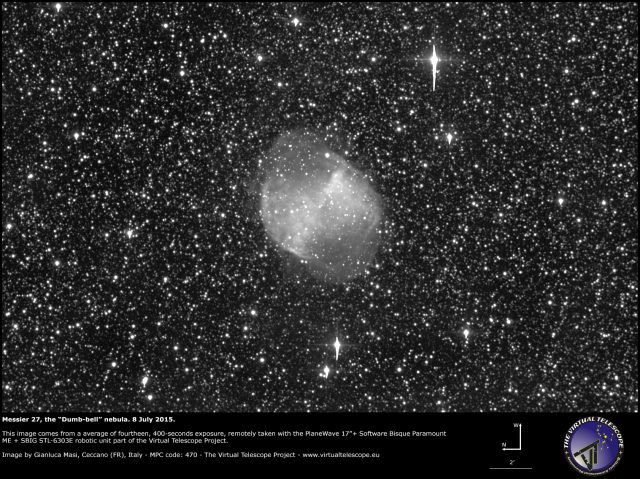 Messier 27, also known as NGC 6853, is for sure one of the best known deep sky objects in the sky. Discovered by Charles Messier in 1764, it is easily recognizable as a fuzzy object with an entry level binocular. Larger instruments will offer more and more, at some point clearly showing the “apple core” shape, which suggested for it the nickname of “Dumb-bell” nebula.

Placed at about 1.200 light years from us, it was the first planetary nebula to be discovered. These objects represent a sight into the future of our Sun, as they mark the final life stages of sun-like mass stars. The dying sun is sitting in its center, being now a white dwarf.

This image above comes from the average of 14, 400-seconds exposures, unfiltered, remotely collected with the  PlaneWave 17″+Paramount ME+SBIG STL-6303E robotic unit part of the Virtual Telescope Project. Binning 2×2, with a resulting scale of 1.2″/pixel. The limiting magnitude reached is almost 21.5.