On 23 May 2017, the Gaia Photometric Science Alerts programme reported the discovery of an apparent supernova, later designed SN 2017egm. It turned out to be the closest hydrogen-poor superluminous supernova (SLSN-I) ever found. We managed to capture an image of this rare explosion. 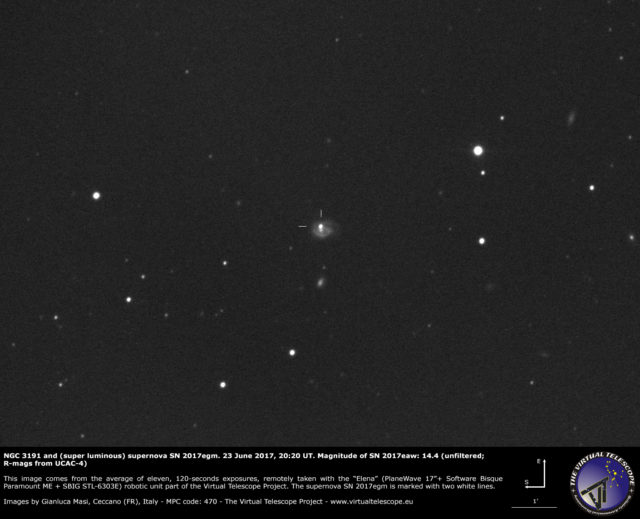 The image above is the average of eleven, 120-seconds exposures, remotely taken with “Elena” (PlaneWave 17″+Paramount ME+SBIG STL-6303E) robotic unit available at Virtual Telescope. The image scale is 0.63″/pixel.

First spectroscopic follow-up suggested it could be a type II supernova, placed at more than 420 millions of light years, making it brighter than typical SNe IIP or SNe IIL.

Further investigations reserved a special surprise, as high quality spectra revealed typical features of  hydrogen-poor superluminous supernovae (SLSN-I). Considering the distance of the host galaxy, NGC 3191, this is the closest SLSN-I discovered to date, with the brightest apparent magnitude ever. Previous SLSNe-I were mainly placed in dwarf galaxies, while NGC 3139 is significantly more massive, about 1/10th the mass of the Milky Way.

From our images, we measured a magnitude of 14.4 (unfiltered, R-mags for the reference stars from UCAC-4). Assuming the distance above of 420 millions of light years, we can infer an absolute magnitude of -21.1, comparable to (and possibly brighter than ) our entire galaxy, the Milky Way.

We plan further observations of this unique target, though its position in the sky is not the best for this part of the year.