NGC 6543, also called “Cat’s Eye”, is a beautiful and famous planetary nebula, among the most enigmatic ones currently known. Located in the northern constellation of the Dragon is and will remain a “timeless”planetary nebula. 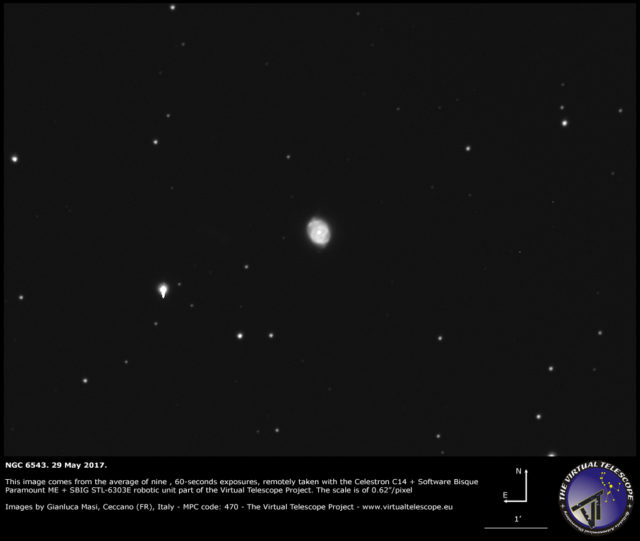 Discovered by William Herschel on February 15, 1786, it is placed among the most difficult planetary nebulae to be investigated:while it has a high superficial brightness (apparent magnitude of 9.8), it has a rather small width of approximately 20 seconds, arc. In 1864, the English astronomer William Huggins demonstrated, through spectroscopy, the real nature of the “nebula” that characterizes it. Until then it was believed that planetary nebulae were actually forming planetary systems, but the typical characteristic spectrum of luminescent gases revealed its real nature.

The image above is the average of nine images of 60 seconds each, remotely taken with the C14+Paramount ME+SBIG ST8XME robotic unit available at the Virtual Telescope.

It is one of the most studied items of its category; only recent research is revealing its structural complexity while remaining visually very linear.

The bows that characterize it, making it looking like a cat’s eye, would actually hide a complex interaction between the gas exterior, probably derived from the expelled material from the central progenitor star in its red giant phase, and polar jets produced by a binary star located in the central region. Spectroscopy reveals the high speed of the stellar winds of about 1.900 km/s and the high amount of ejected material, equal to 3,2×10−7 solar masses per year.

Another curiosity of “Cat’s Eye Nebula” is its position. It is located exactly in the direction of the north ecliptic pole and diametrically opposite to the Large Magellanic Cloud. This position causes the nebula to stay at the same declination throughout all precessional times, thus remaining “timeless”.

Many secrets of the NGC 6543 nebula wait to be unveiled and are under study. This makes it a small planetary nebula, but very rich of future surprises.