Yesterday, we wrote about the discovery of an extremely interesting object, C/2017 U1, traveling in the inner Solar System along an hyperbolic orbit. The first announcement mentioned a cometary nature, potentially making it the first interstellar comet ever found. Last night, deep imaging at the Very Large Telescope showed no hints of cometary activity, so the object received a new designation: A/2017 A1. But it remains an amazingly interesting body. 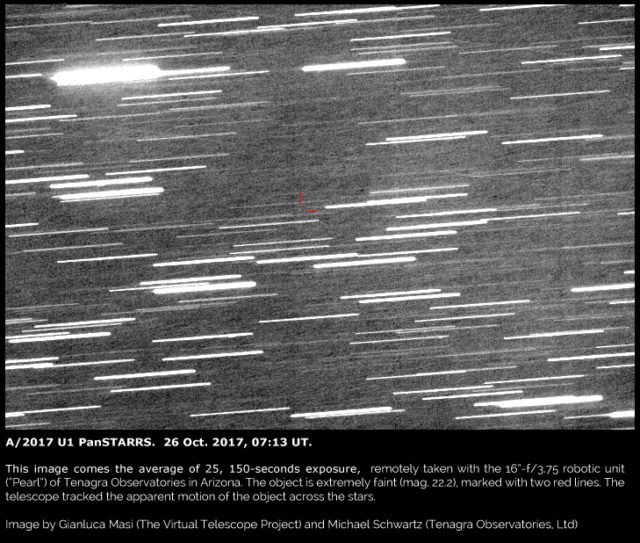 The image above is an exceptional one. It comes from the average of 25, 150-seconds exposures, unfiltered, remotely taken with the 16″-f/3.75 Tenagra III (“Pearl”) robotic unit part of Tenagra Observatories in Arizona. It shows A/2017 U1 as a very faint point of light, at the expected position. We measured a magnitude of 22.2, really deep for a 16″ telescope. This was possible thanks to the exceptional sky at the observing site.

The Minor Planet Center issued its electronic circular MPEC 2017-U183, reporting the following comments by its Associate Director, Gareth V. Williams: “K. Meech (Institute of Astronomy, University of Hawaii) reports that in a very deep stacked image, obtained with the VLT, this object appears completely stellar. The prefix for the designation 2017 U1 is therefore being changed to A/, in line with the 1995 IAU Resolution on the system of comet designations.”

Accordingly with the rules of the International Astronomical Union, the prefix “A/” indicates an object that was mistakenly identified as a comet, but actually is an asteroid.

But the hyperbolic orbit remains, so the origin of such an object is of extreme interest.

These observations are part of an important partnership between the Virtual Telescope Project and Tenagra Observatories.