Comet 174P/Echeclus was spotted in outburst early last Dec. 2017. Recently, we managed to do some follow-up, finding that a faint coma is still visible. Here we present our images. 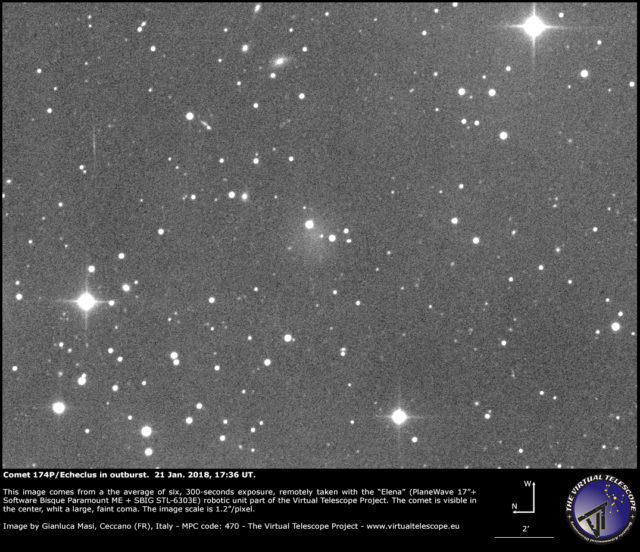 The image above comes from the average of six, 300 seconds exposures,remotely taken with “Elena” (PlaneWave 17″+Paramount ME+SBIG STL-6303E) robotic unit available at Virtual Telescope. A faint coma is easily visible all around the false nucleus, while one month earlier it was brighter and smaller.

A few weeks later, while the sky was not really perfect, we slewed the same telescope used above to capture again this intriguing object. After reducing and averaging the captured CCD frames, we obtained the image below. 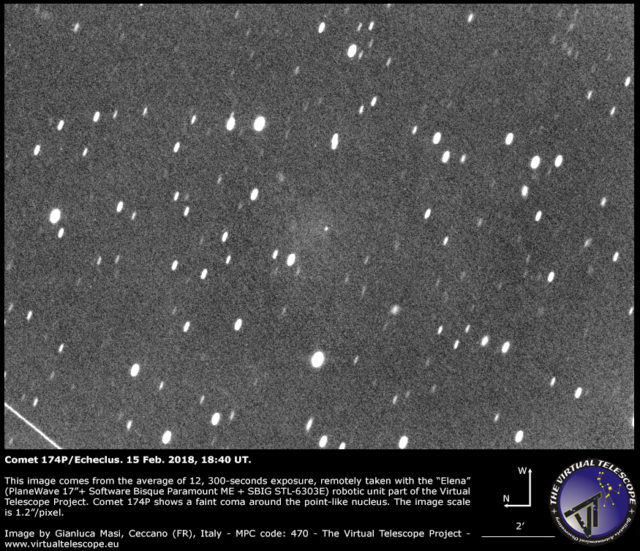 The image above comes from the average of 12, 300 seconds exposures,remotely taken with “Elena” (PlaneWave 17″+Paramount ME+SBIG STL-6303E) robotic unit available at Virtual Telescope. The coma is significantly fainter than in our Jan. observations, showing a similar shape. The sky was not very good, this winter has been cloudy so often, in Italy.

174P/Echeclus was discovered in 2000, when it showed stellar appearance and was classified as a Centaur object (with number 60558), but in Dec. 2005 it showed clear cometary features. On Sept. 2016, it was spotted in outburst and we could cover it for a few weeks.

We covered this object frequently, since it was spotted in outburst, last Dec. 2016, from Italy and Arizona, thanks to our partnership with Tenagra Observatories. This work is part of this cooperation. We plan to present all the images soon.