Our readers could remember this interesting object: comet 174P/Echeclus. Last year, we saw it in outburst, following up its evolution. Now, this intriguing object decided to go in bright outburst again and we are pleased to show an image of the ongoing event. 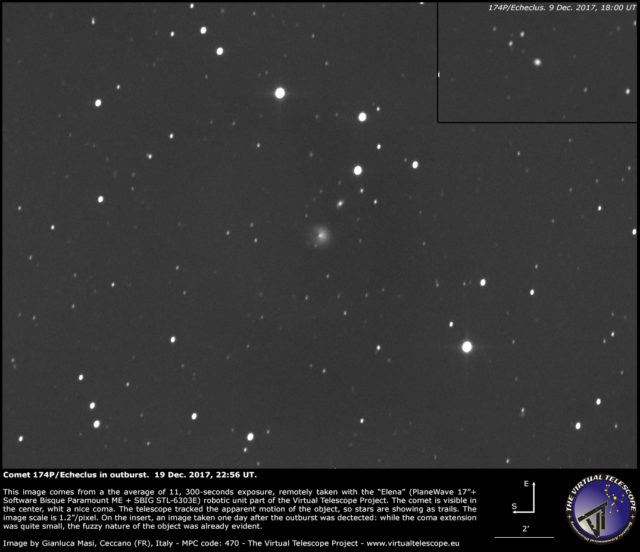 The panel above shows two images. The main one comes from the average of 11, 300 seconds exposures,remotely taken with “Elena” (PlaneWave 17″+Paramount ME+SBIG STL-6303E) robotic unit available at Virtual Telescope. Comet 174P/Echeclus shows a very interesting coma, with an intriguing fan shape and a darker structure. In ten days, the dust envelope expanded quite a lot.

On the upper right, in the insert, an image of the same comet, taken with the same instruments above the day after the outburst was reported by B. Skiff (Lowel Observatory), shows a much less extended coma, though the fuzzy nature of the object is evident, after log scaling the image.

We tried to measure the angular extension of the coma: on 9 Dec., we measured 20 arc-seconds, while on Dec. 19 we measured 60″.

174P/Echeclus was discovered in 2000, when it showed stellar appearance and was classified as a Centaur object (with number 60558), but in Dec. 2005 it showed clear cometary features. On Sept. 2016, it was spotted in outburst and we could cover it for a few weeks.

Needless to say, we are keeping an eye on this, both from Italy and Arizona (from the latter we are regularly collecting images), thanks to our partnership with Tenagra Observatories. This work is part of this cooperation.