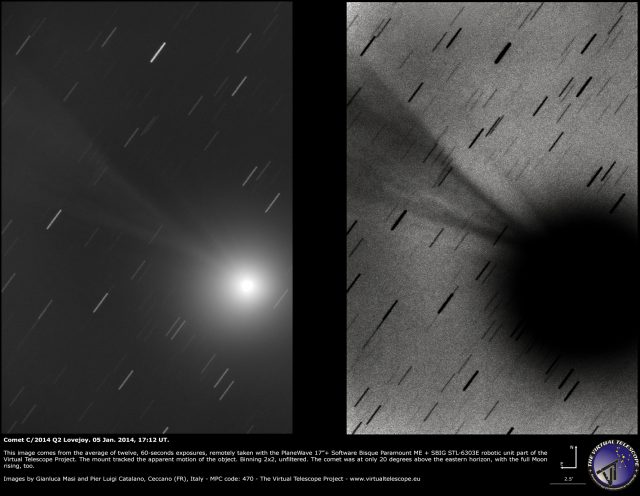 On 5 Jan. 2015, after a couple of cloudy nights, the sky was still clear again and at Virtual Telescope we planned another imaging session of comet C/2014 Q2 Lovejoy. The Moon was full, so we managed to capture the comet quite early in the evening: this way, we did not give to the Moon enough time to be high and highly invasive; of course, we were forced to work with the comet at only 20 degrees of altitude.

As we see, the idea was a winning one; images captured later, with the comet – and the Moon, too! – higher in the sky were clearly less impressive.

The image above comes from the average of twelve, 60-seconds unfiltered exposures, remotely collected with the  PlaneWave 17″+Paramount ME+SBIG STL-6303E robotic unit part of the Virtual Telescope Project. The telescope tracked at the apparent rate of the comet.

The object was at about 20 deg. of altitude above the SE horizon. The full Moon was just rising and this helped to limit its interference, but it still affected the sight.