Geminids 2017, what a memorable show for our community!

Yesterday night, the Geminids meteor shower peak was absolutely spectacular to see. We could show the best meteors show of 2017 to the world, thanks to our wide field cameras in Italy and Arizona. While clouds made the view problematic from Italy, the sight from the Sonoran desert was breathtaking, with a very special gift! 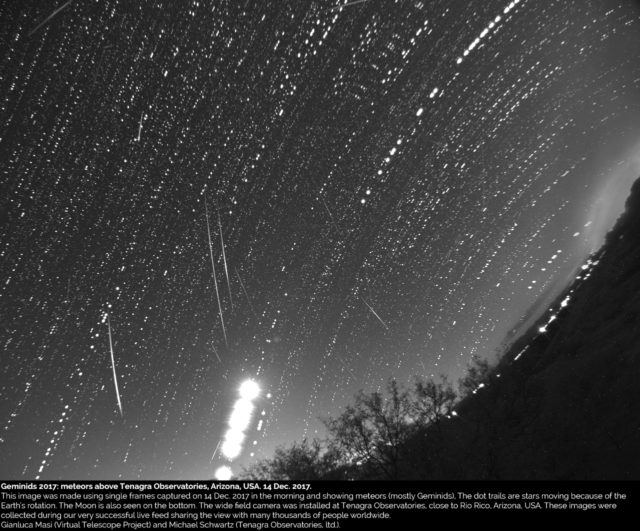 Meteors (almost all Geminids) captured on 14 Dec. 2017, during our live feed from Tenagra Observatories, AZ

We have been waiting for the Geminids for weeks, knowing it was going to be the best shooting stars show of the year. We scheduled a couple of public, online events showing all this in real-time, as well as special observing sessions covering the asteroid Phaethon, the Geminids’ parent body. Unfortunately, the live view from Italy on 13 Dec. was made impossible by the clouds, but at least we could see asteroid (3200) Phaethon. Looking at the “dad” of the Geminids, while the shower was ready to put on its amazing show, was an experience for sure. 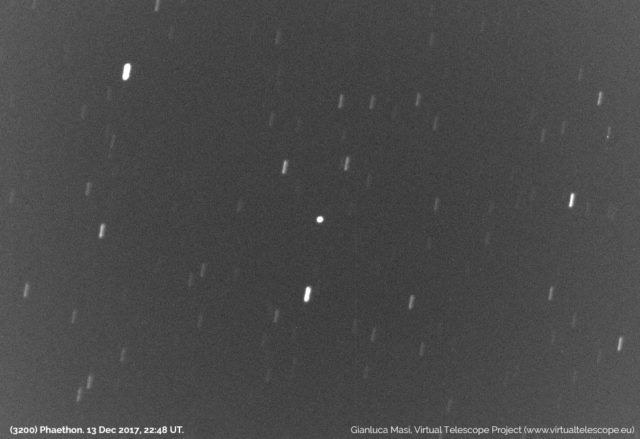 A few hours later, we had our second round with Geminids. For this, we were ready to connect to the instruments available at Tenagra Observatoires, as part of the important partnership we announced earlier this year and starting right now to do amazing things to bring the Universe down to Earth. Sky conditions were simply superb there, something making us very happy, after the bad weather we had in Italy. A wide field imaging camera was properly pointed up to the sky, covering a large portion of the heavens.

We could see meteors since the very beginning, enjoying many shooting stars, including bright ones. Sometimes, more than just one streak were visible in the same image. 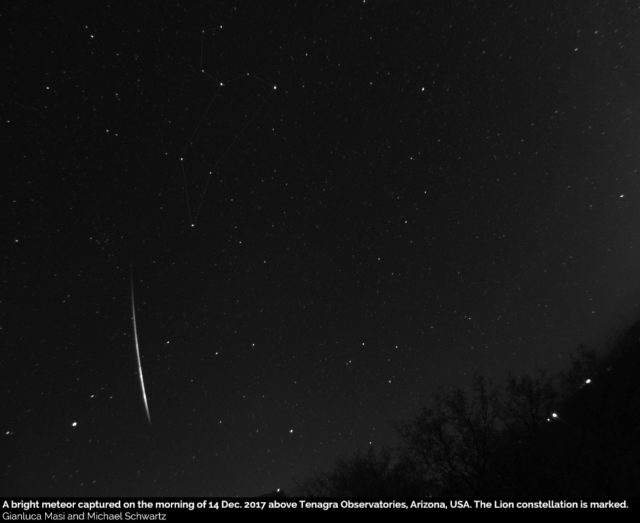 But the view was enchanting even when no meteors were visible. Seeing the Winter stars, slowly moving while our planet spun and later followed by the Spring constellations was a joy. Only those knowing this feeling by experience can understand: this is something everyone should see, from time to time.

While we were looking up this way, another all-sky camera was surveying the stars and it grabbed a huge number of meteors, too. One of the shooting stars it captured really stands out: a superb fireball which was very, very bright. 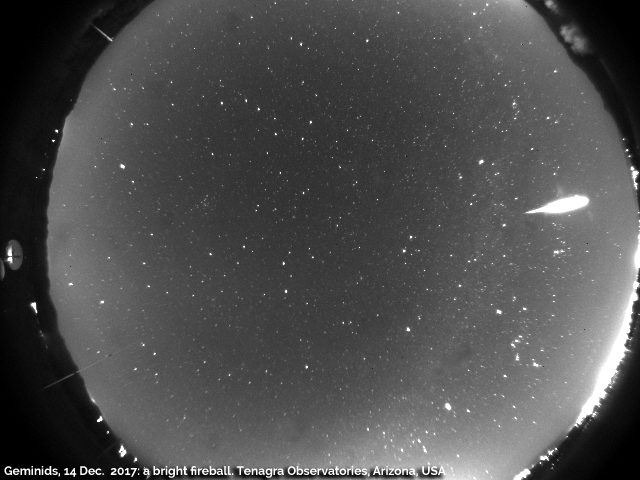 A very bright fireball captured on 14 Dec. 2017 at 11:09 UT above Tenagra Observatories

At some point, the Moon rose, but it was absolutely not a issue: we continued to see even faint meteor streaks. At some point, a very special guest joined the view: a tarantula having its house close to the all-sky camera. After all, the show was for everyone! 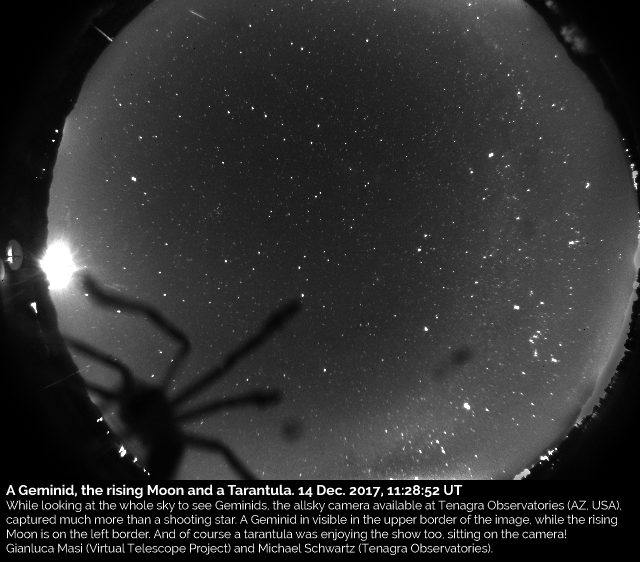 We also made a time lapse to show how many meteors showed above the telescopes at Tenagra.

Below, please find the podcast of the two live feeds covering Geminids 2017, from Italy and Arizona.

These two events were a planetary success: more than 40,000 viewers wanted to join us and look at the stars.

I wish to thank my very dear friend Michael Schwartz, Director at Tenagra Observatories, partner of the Virtual Telescope Project: soon, this joint adventure will change the way the world enjoy the wonders of the Universe and these first steps are truly promising.

Back to the podcast” page