For the very first time, a comet coming from the extra-solar space has been very likely discovered. Comet C/2019 Q4 Borisov has a speed and an orbital eccentricity strongly suggesting a interstellar origin. While more data are needed to very likely confirm this exceptional finding, we observed this object this morning, under extremely hard sky conditions. 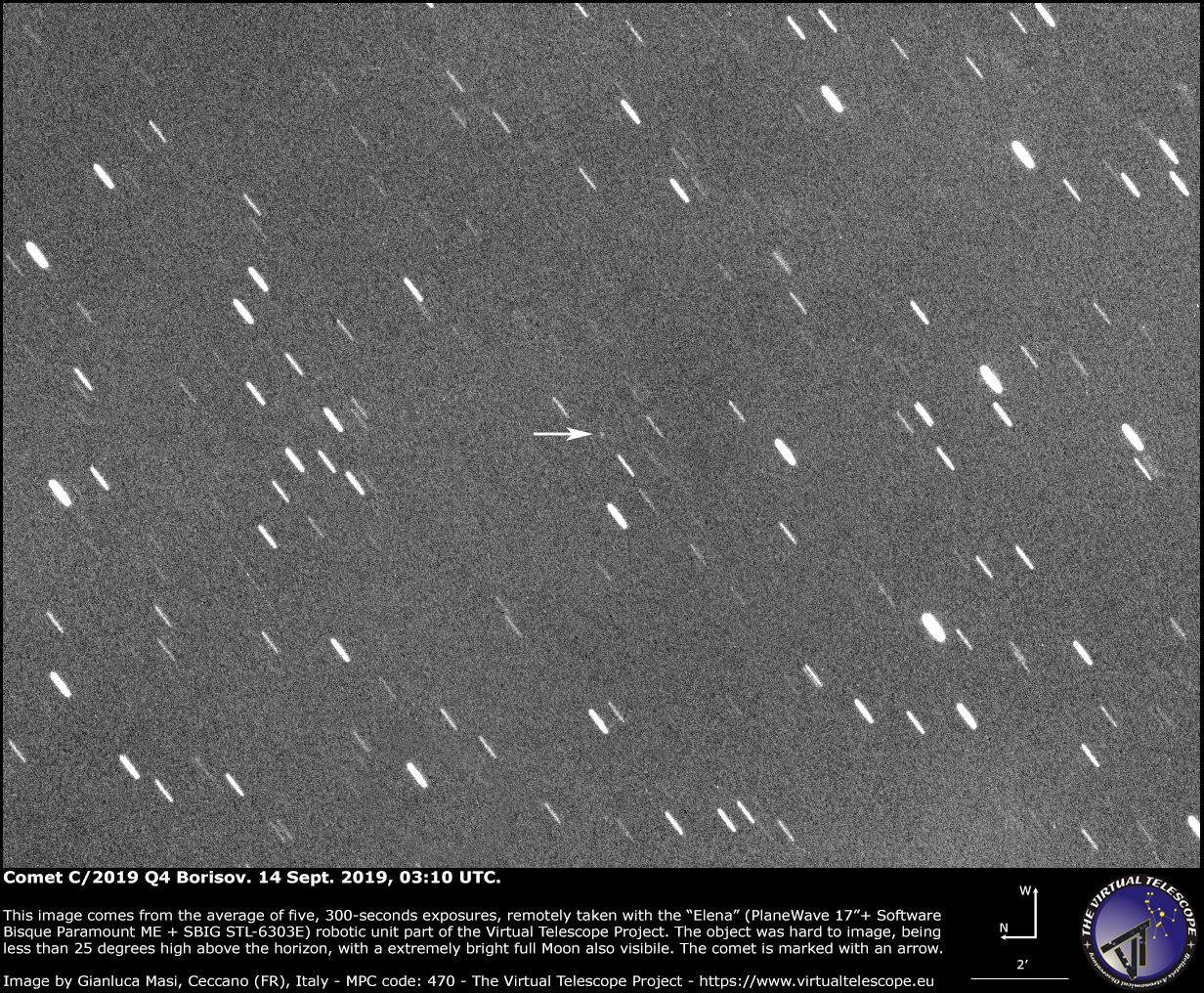 For the second time in history, we are very likely seeing an object crossing the Solar System region, but coming from the deep, extra-solar space. It is comet C/2019 Q4 Borisov: its eccentricity (at this very moment, the best eccentricity estimate is e = 3.2076692, that is a clearly hyperbolic – opened – orbit) and especially its speed when it approached the Solar System (about 30 km/s) suggests it is an interstellar comet.

The image above comes from a the average of five, 300-seconds exposure, remotely taken with “Elena” (PlaneWave 17″+Paramount ME+SBIG STL-6303E) robotic unit available at Virtual Telescope. The telescope tracked the apparent motion (1.3″/minute) of comet C/2019 Q4, this is why stars show as long trails, while the object looks like a sharp dot of light in the center of the image. At the observing time, the target was less than 25 degrees above the horizon, with dawn approaching and an extremely bright full Moon on the opposite part of the sky.

Comet C/2019 Q4 Borisov was discovered by Gennady Borisov from Crimea and observations from a number of observatories around the world suggested it to be a very special one, likely coming from the deep space, well beyond the Oort Cloud.

Looking at the available orbit, we can say this comet will be visible for about one year or so, making possible for astronomers a quite detailed study. Hours ago, colleagues from the Istituto de Astrofisica de Canarias grabbed a spectrum, telling us C/2019 Q4 is not so different from our “local” comets.

While C/2019 Q4 Boris is (very likely) the first interstellar comet ever observed, in 2017 we already observed an interstellar interloper, that is 1I/’Oumuamua. The latter showed an asteroid-like aspect, with no obvious cometary activity and it was visible only for a short period of time.

Surely, C/2019 Q4 Borisov will be intensively observed in the next months and the Virtual Telescope will keep an eye on it, too.