20 years after discovering it, I re-observed asteroid “(98722) Elenaumberto“,  celebrating my parents for, among many other reasons, being my most precious supporters in my astronomical adventure since I was a child. 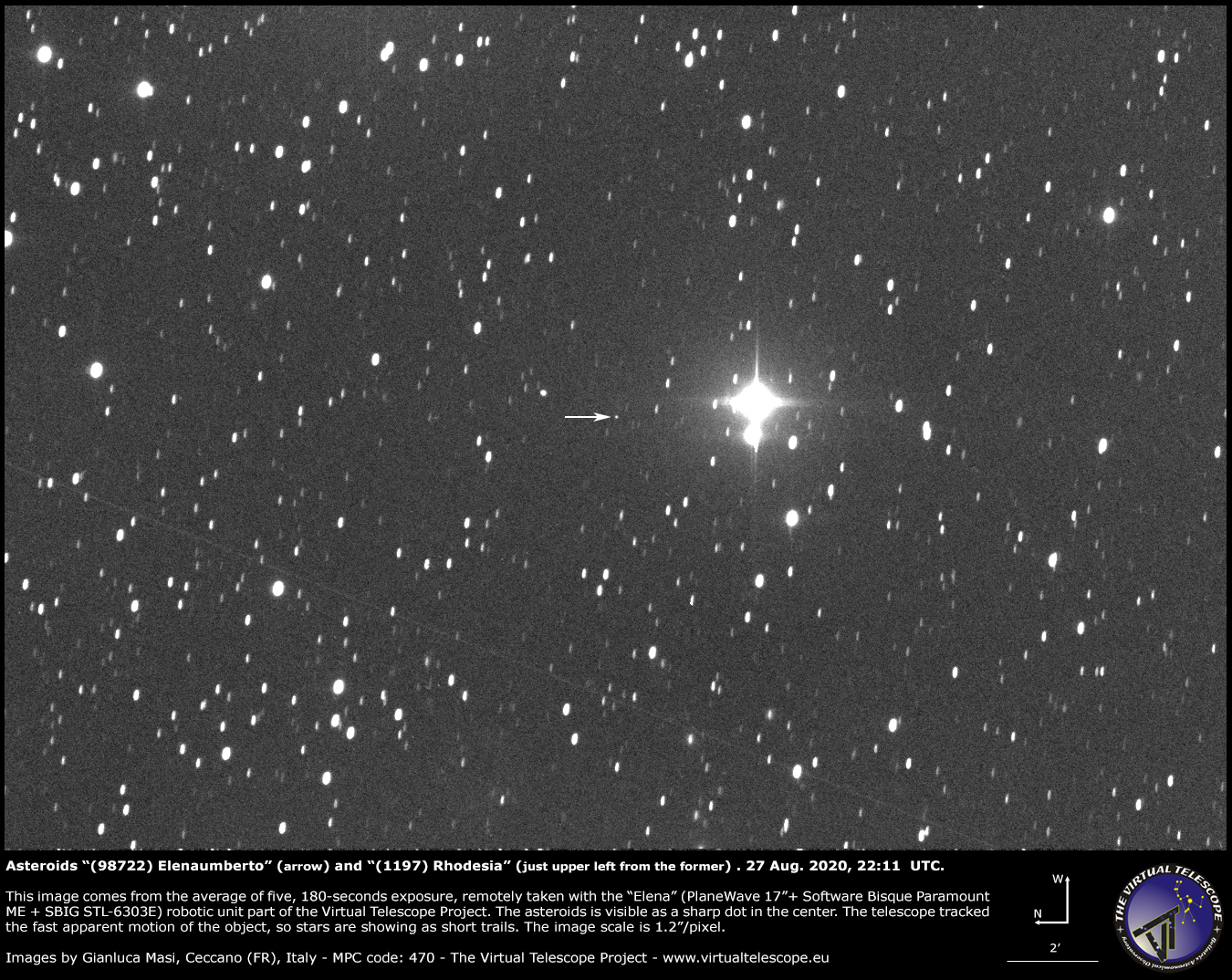 The image above comes from the average of five, 180-seconds exposures, unfiltered, remotely collected with the “Elena” (PlaneWave 17″+Paramount ME+SBIG STL-6303E) robotic unit available at the Virtual Telescope Project. The robotic telescope tracked the apparent motion of asteroid (98722) Elenaumberto, so stars left short trails on the background, while the asteroid (marked by an arrow) shows like a sharp, dot-like object in the center of the image. There is another, brighter asteroid, just on upper-left from Elenaumberto: it is (1197) Rhodesia (discovered in 1931 from Johannesburg).

I observed this asteroid for the first time on the night of 22 Dec 2000. At that time, it was the 14th asteroid I discovered from Ceccano (Italy), where the Virtual Telescope Project facility is based. That night, I was recovering my older discovery 1999 RL35, in Gemini. Few arcmins on the North, I noticed a faint, moving body. After a quick check, I found it was a new minor planet. I took three frames, but one of them showed the asteroid too close to a bright star. Below is an animation made with the two of the discovery images, showing the asteroid in motion: the object is faint, a bit on the right from the center.

Because of bad weather conditions, I asked for the help of other observers for the second night observations, needed to get discovery credits; Among them, Peter Kusnirak, Ondrejov observatory, got it, in four images His astrometry has permitted to receive the designation 2000 YJ8. Jim Roe, Mexico, recovered it too and his astrometry has been sent to the Minor Planet Center. Jim observed it also the following nights, in order to have enough data to compute an orbit.

A few years later, the orbit of the object was well-know to the point it could get a definitive catalogue number (98722) and the discoverer (me) could send a naming proposal to the International Astronomical Union. In 2006, the Minor Planet Center officially announced the name and the citation, here it is: “98722 Elenaumberto. Discovered 2000 Dec. 22 by G. Masi at Ceccano.
Elena Persichilli (b. 1940) and Umberto Masi (b. 1926) are the parents of the discoverer, who expresses eternal gratitude to them. This citation celebrates the great importance they had in supporting him over the last 26 years, since the beginning of his interest in astronomy, up to his professional involvement with this science.”.

I must admit it is such a great emotion to remember these things, now that my mother is among the stars: I wanted to celebrate my parents with this new image and I thank all of you for looking at it.