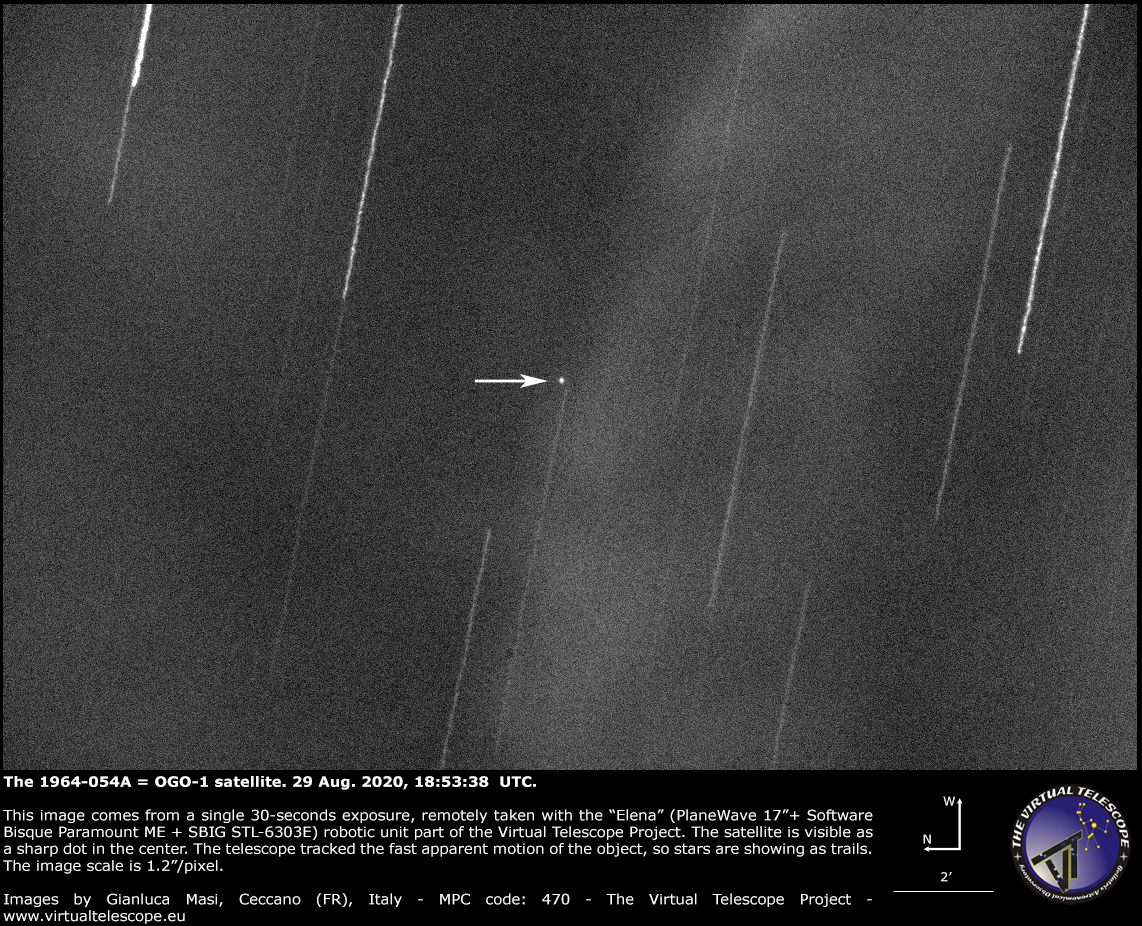 As you probably know, at Virtual Telescope we have been tracking satellites and space probes from time to time. That said, how could we miss the opportunity to capture a 56 years old satellite going to reenter the Earth atmosphere?

I have learned about satellite OGO-1 (Orbiting Geophysical Observatory 1) reentering the atmosphere after the Catalina Sky Survey spotter it on the night of August 25–26, while looking for asteroids. Such a finding triggered some nice discussion on the MPML board and data shared by a few observers made possible to have a reliable ephemeris to look for it. In particular, I really want to thank Bill Gray, at Project Pluto, for his work to calculate and make available orbits and TLE elements from those observations: it has made possible for me to track the satellite.

OGO-1 was the first of six observatories launched more than 50 years ago. I invite you to discover more on it at the specific Nasa page; if you want to understand what has happened these days with its reentry, you really must read the great story written by my friend David Dickinson on Sky & Telescope.

As soon as I realized I could have a look from Italy; I managed to plan the observations. On the evening of 28 Aug., being clear, I used the TLE elements kindly provided by Bill to slew the telescope at the expected position and… OGO-1 was there, visible at first glance! 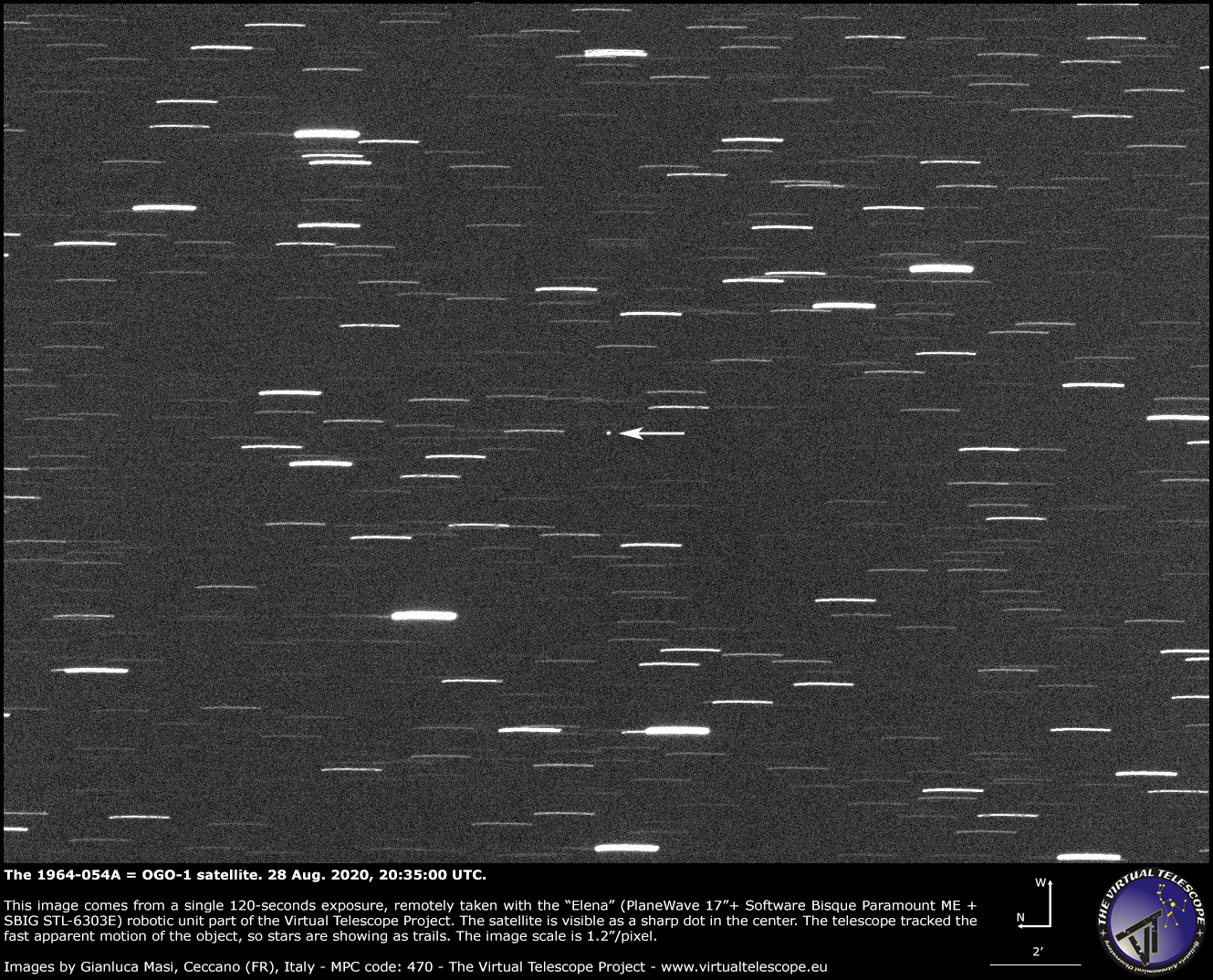 The image above comes from a single, 120-seconds exposure, unfiltered, remotely collected with the “Elena” (PlaneWave 17″+Paramount ME+SBIG STL-6303E) robotic unit available at the Virtual Telescope Project. The robotic telescope tracked the apparent motion of OGO-1, so stars left short trails on the background, while the satellite (marked by an arrow) shows like a sharp, dot-like object in the center of the image. At the imaging time, it was at about 130000 km from me.

On the same evening, I collected 91 frames back to back, using them for the time-lapse below, where the satellite is seen in motion across the stars.

Bill Gray, Project Pluto, estimated the reentry date and time for OGO-1 to be 29 Aug. 2020, around 21:00 UTC. I decided to try to observe that evening too, hoping to find the satellite in those very last hours of its space-life. The sky was clear again, so it was well worth to give it a try.

I had the great idea to look for it as soon as the sky was dark enough: not only I was rewarded with the satellite (I could see it about 10 arcminutes East of the expected position), but it was quickly moving East, going to set over Italy pretty soon! Now, OGO-1 was moving more than 20 times faster!

The image at the beginning comes from a single, 30-seconds exposure, unfiltered, once again remotely collected with the “Elena” (PlaneWave 17″+Paramount ME+SBIG STL-6303E) robotic unit available at the Virtual Telescope Project. The robotic telescope tracked the now much faster apparent motion of OGO-1: now, it was at about 30000 km from me. A few minutes later, the object was too low to be imaged from Italy. For the record: I scheduled and executed these observations through my smartphone, this telling once again about the power and flexibility of the robotic Virtual Telescope Project facility.

OGO-1 was seen and filmed while reentring from the French Polynesian, as expected (and without any damage, this too as expected!).

I hope the images above brought to you my excitement and feelings while I was tracking this man-made stuff.