Now that the Halloween Blue Moon has gone, of course without any hint of that color, I could look at the images more carefully. Well, the Moon had a special treat for us: it showed its subtle green flash. Which was a precious gift, actually. 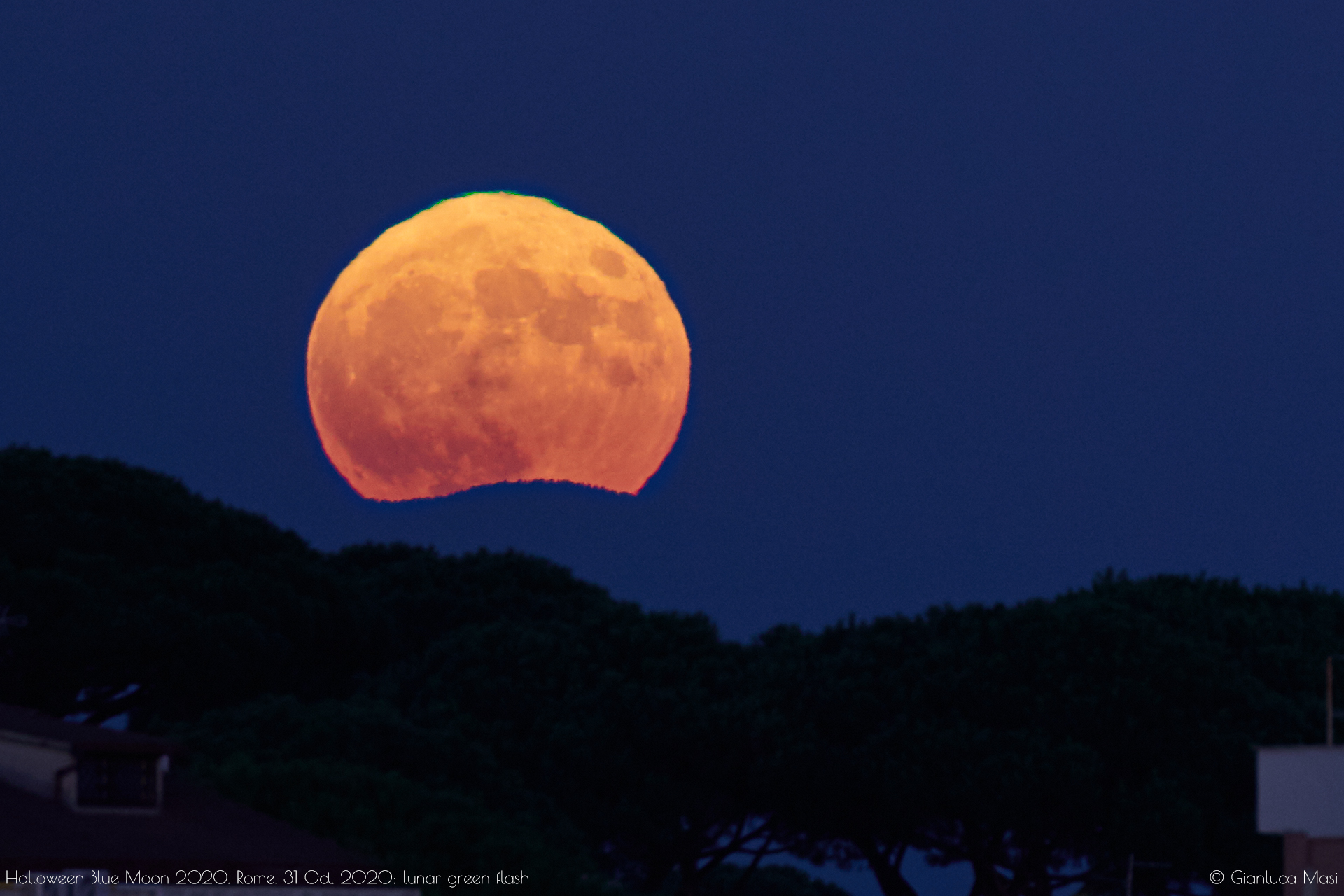 First of all, let me say it again, clearly: what we call “Blue Moon” is just the 2nd full Moon in a given month or the 3rd full Moon in a season hosting four of them: nothing to do with a real blue color (which the Moon wears from time to time, when there are volcanic dust/smoke particles in our atmosphere).

That said, the last Blue Moon was a superb sight from Rome: the sky was very clear and I could wait for our satellite to rise from the top of my house. Luckily, there were no major obstacles on the horizon, so I could see the Moon immediately after it rose. I really like to see our satellite combined with elements of our home planet.

Because of the pandemic, I preferred to safely set up my imaging gear on my roof, something I did 30 minutes before moonrise, to be sure to have everything ready. I used one of my Canon 5D mark IV DSLR bodies and a Canon EF 100-400mm f/4.5-5.6 L IS USM II lens, both on a sturdy tripod. I carefully identified the exact point on the horizon from where the Moon should show.

And it did as expected: I had the first glimpse of our Moon 8 minutes after its rise, when it was less than 1 degree above the horizon.It was a superb view: I have seen this hundreds of times, but the beauty of this is so huge that you are overwhelmed every single time. 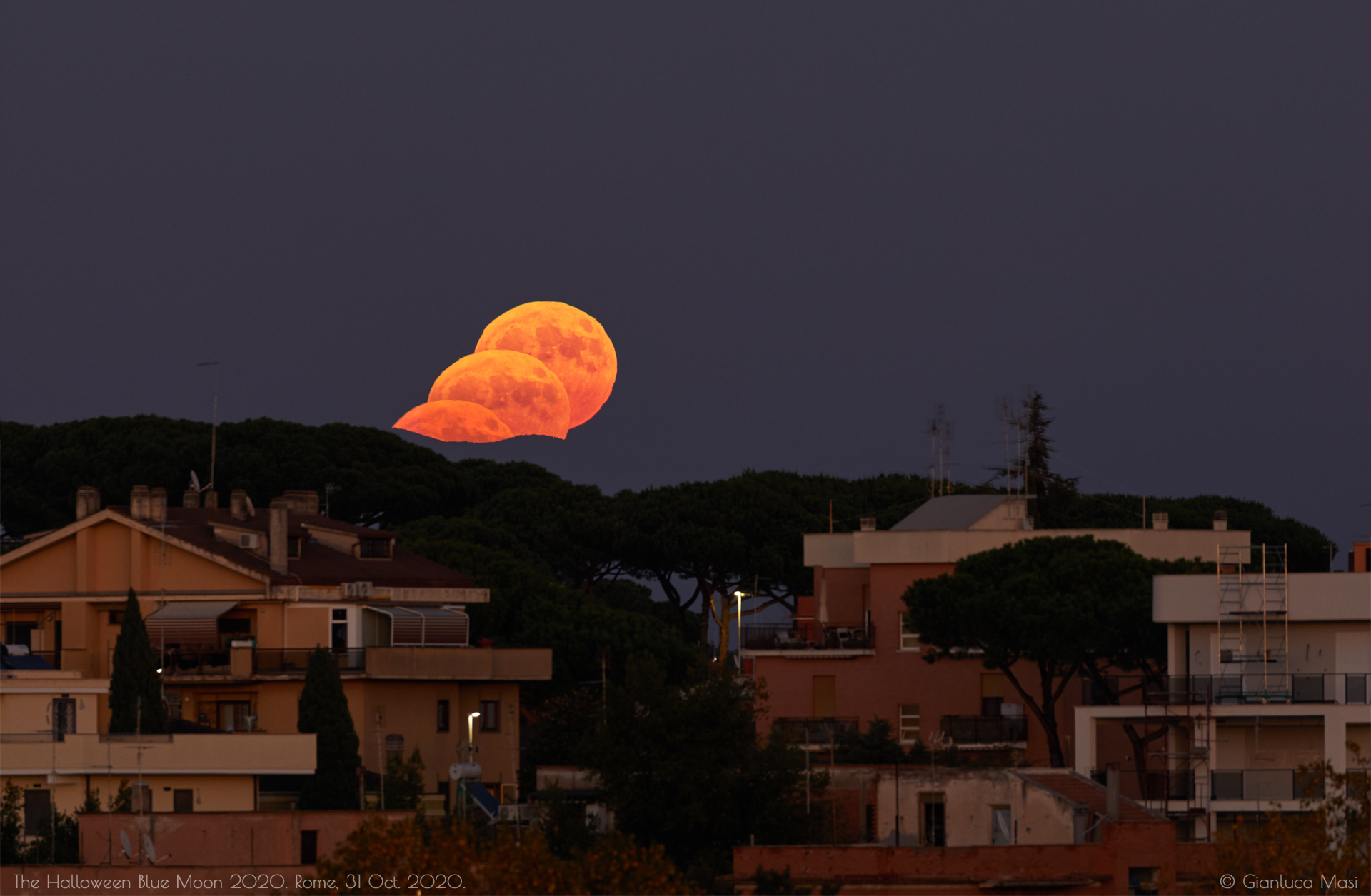 The image above comes from a composition of three different frames, showing the Moon slowly entering the “Trick or Treat” game of the night, literally… “Knockin’ on Heaven’s Door”. The color of the Moon was significantly reddish, because of the absorption of our atmosphere (the same reason why you see a red Sun at sunset/surise). But with a binocular I noticed something more.

From time to time I could see the upper border of the lunar disk clearly greenish, something know as the rare lunar “green flash”. I never saw this so well earlier, I must say, so I was really amazed.The image at the beginning of this post shows this very well: you see the upper border of the Moon is green. The most spectacular version of this phenomenon shows the green limb detached from the disk, when it is close to zero altitude, and it rises and sets before/after the disk (hence the name “flash”), but what I captured here was pretty close to that. So the Moon had a special treat for Halloween night, actually a gift.

The green flash is rarely visible on the Sun and, even more rarely, on the Moon: it is an effect of our atmosphere, acting as a huge prism and bending colors mixed in the solar/lunar light differently. This is apparent when those object are extremely low above the horizon. Shorter wavelengths are bent more, so the green component is “lifted-up” vs the red one, hence the upper, greenish limb.

Later in the night I captured the mere full Moon disk, as part of the live feed I shared with the world, hosting more than 70 thousands viewer. 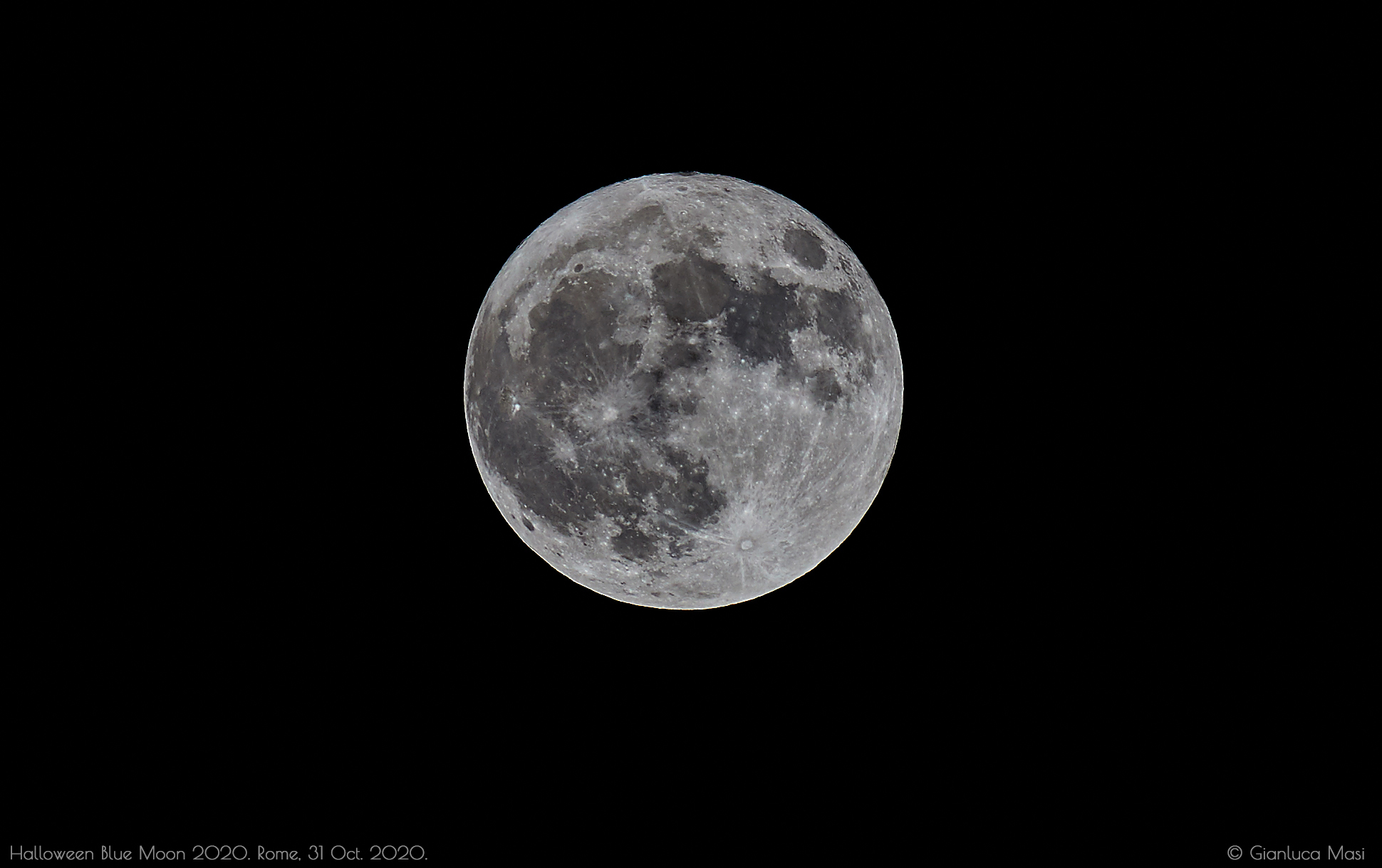 The Halloween Blue Moon 2020 at night.

Below is the podcast of the live feed.