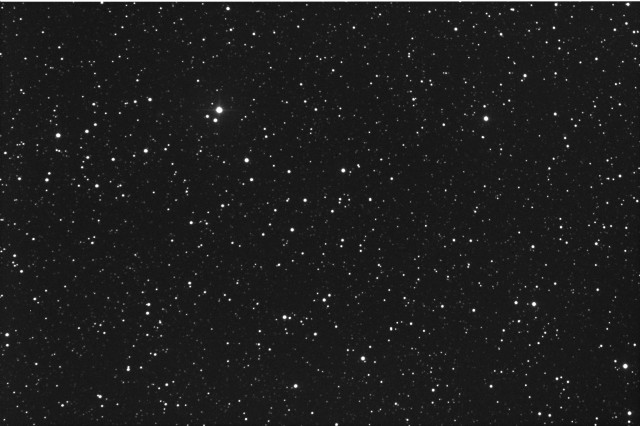 Do you remember the spectacular Nova Delphini 2013? It erupted in Aug. 2013 and was a nice sight by naked eye, when it peaked a bit fainter than mag. 4. By the end of the summer, it was almost forgotten, not only by casual stargazers, but also by many seasoned amateur astronomers.

At Virtual Telescope we managed to provide a lot of follow-up, including spectroscopic characterization of the nova nature and from time to time we checked for the health of this superstar.

Above is an image we recently collected on 09.05 May 2014, coming from the average of five, 60-seconds exposures, unfiltered, remotely using the PlaneWave 17 robotic unit part of the Virtual Telescope Project. The star was estimated to be at mag. 12.4 (using R mags for the reference stars from UCAC 4). Nova Del 2013 is in the center of the picture.

Using four images from the set we have for this star, we managed to document very well how the source evolved in brightness: a nice movie is available below, with images taken, from bright to faint, on 18 Aug., 12 Sept., 10 Oct. 2013 and 9 May 2014.

We will keep an eye on this star in the next months.