Saturn occultation by the Moon, 14 May 2014: a spectacular image 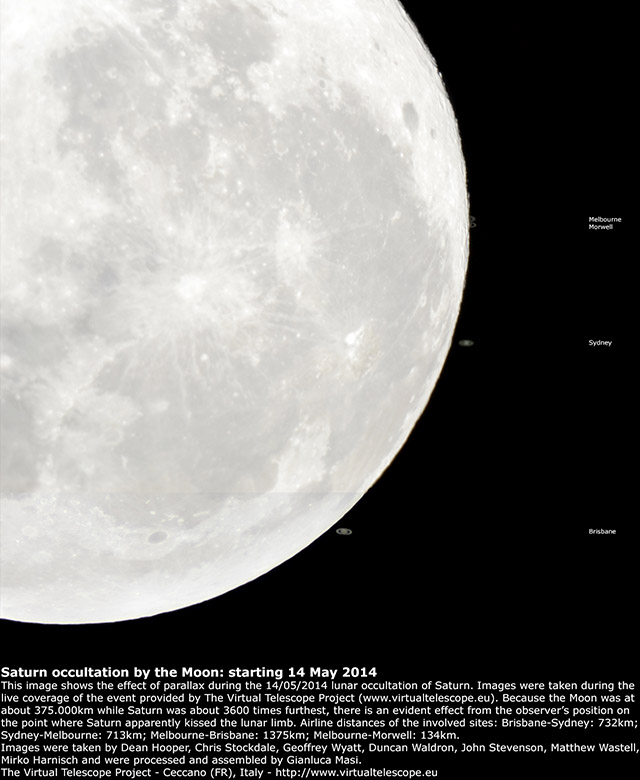 Saturn occultation by the Moon – 14 May 2014: effect of parallax

The Virtual Telescope Project provided a live coverage of the lunar occultation of Saturn, last 14 May 2014. The event turned out to be a fantastic experience, with thousands of viewers from all the planet, enchanted by the almost full Moon covering the ringed planet, with Saturn best placed in the sky, at opposition.

The live feed was possible thanks to an handful of amazing observers in Australia and New Zealand:  John Stevenson, Chris Stockdale, Geoffrey Wyatt, Dean Hooper, Matthew Wastell, Duncan Waldron and Mirko Harnisch. They did an excellent work, taking wonderful images and sharing them right away, for almost real-time view via our web feed. A few of them were under clouds, but they still did an excellent work during the whole campaign, facing the unfavorable weather, ready to capture the occultation.

Soon, we will present a set of the images captured that night, but there is one preliminary one which is well worth a preview.

Observers joining this live feed were spread over a quite large area, involving Australia and New Zealand. Because the Moon is much, much closer than Saturn, observers placed in different sites saw the planet following a different occultation path: the more distant the observers, the more evident the differences. This is what we call parallax.

At Virtual Telescope we assembled images coming from four different locations and covering the beginning of the event, with Saturn going to disappear behind the lunar disk. The resulting image is above: the zone of the Moon going to “kiss” Saturn are so different, depending from the relative distances.

This is a spectacular example showing how the position on the Earth influences what you see in the sky… to the point that people far enough from AU and NZ did not see the occultation at all.