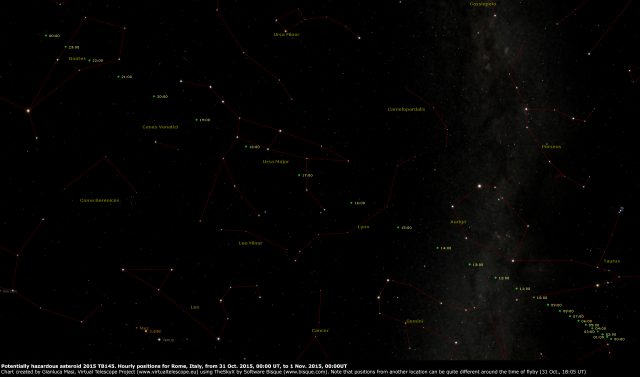 The potentially hazardous asteroid 2015 TB145 will put a nice show in the sky next 31 Oct. This 500-meters large minor planet will come as close as 500.000 km, that is 1.3 lunar distances, all this making it the closest approach by an asteroid that big since 2006. 2015 TB145 will become quite bright, with a peak magnitude of 10.0. It will be accessible with small, 100mm aperture telescopes.

Unfortunately, a very bight Moon could be a severe obstacle, especially early on 31 Oct., when the asteroid will be in the same part of the sky as our satellite, shining at mag. 12.0 or so. Later, conditions will improve, but the altitude of the target above the horizon can be a issue for many observers.

Because of its short distance, 2015 TB145 will move pretty fast across the sky, so locating it will not be as easy as its good brightness would suggest. But with some work, that could be done. The short distance involved will produce a relatively huge parallax: from different observing sites, it will show at quite different positions in the sky, this requiring an explicit ephemerides for your very own site.