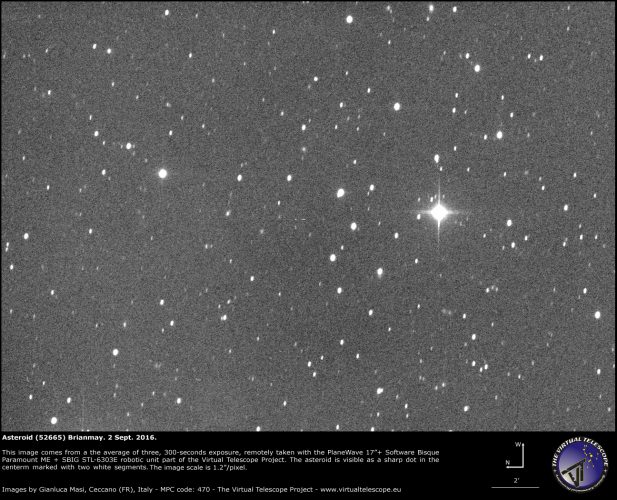 Asteroid (52665) Brianmay, named after Brian May, Queen’s guitarist and astrophysicist

For many of us Brian May is, for many good reasons, a legend. Founder and guitarist of the epic rock band Queen, Brian also attained a PhD in Astrophysicist and co-founded Asteroid Day in 2014. Asteroid Day “is a global awareness campaign where people from around the world come together to learn about asteroids, the impact hazard they may pose, and what we can do to protect our planet, families, communities, and future generations from future asteroid impacts” (from the Asteroid Day website).

At Virtual Telescope we worked in the framework of Asteroid Day since the first, 2015 edition. In 2016 we also worked for it as official coordinators for Italy, with outstanding results. In addition, in 2016 we started to be an official partner of Asteroid Day.

While 30 June 2017 (the next Asteroid Day celebration) is still apparently far, at Virtual Telescope we already started working on it, as always in strong connection with the International team. As you know, asteroids are a  very important topic as part of our scientific and public activities and we can always provide first-hand stuff when talking about them. For example, last week we were the only facility in the world to perfectly track the near-Earth asteroid 2016 QA2 while it had an extremely close (within 85.000 km) encounter with the Earth.

But last night we wanted to image a special asteroid, no less than the one named after Brian May! It is officially named (52665) Brianmay: it was discovered in 1998 and named after Brian ten years later. This is the official citation released by the International Astronomical Union: “In 2007 Brian May (b. 1947) received his Ph.D. in astrophysics from Imperial College, London, for a thesis on zodiacal dust. Eight months later he became chancellor of Liverpool John Moores University. He is also lead guitarist and songwriter for the rock group “Queen”. The name was suggested by P. Moore.”.

The image above is the average of three, 300-seconds exposure, remotely taken with PlaneWave 17″+Paramount ME+SBIG STL-6303E robotic unit part of the Virtual Telescope. The robotic mount tracked the apparent motion of the asteroid, so stars are slowly trailing, while the asteroid is the little sharp dot in the center, marked with two white lines.

We want to thank Brian May for his tireless and inspiring dedication to public outreach about asteroids and their potential impact risks. We also thank all the people working with him, we are proud to cooperate with them.

A final thought: this image was grabbed three days before Freddie Mercury’s 70th Birthday. We want to thank Brian, Freddie and all the band for their music, which is so deeply part of our lives.