Last 5 Sept. 2016, asteroid (17473) Freddiemercury has been officially named by the International Astronomical Union after Freddie Mercury, the lead vocalist and co-principal songwriter of the epic rock band Queen. It was announced on the occasion of the 70th birthday of Freddie. 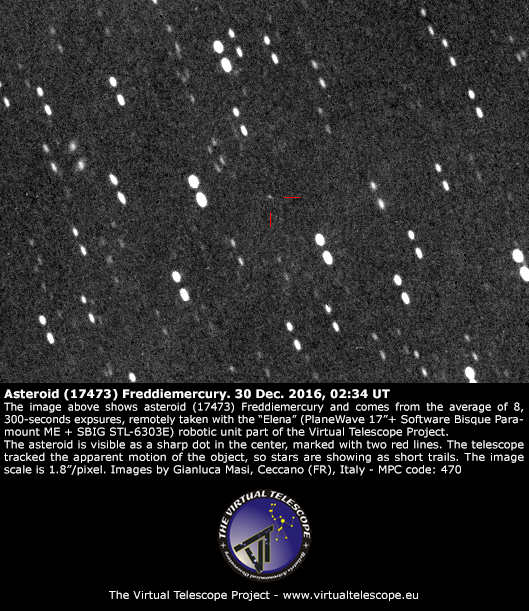 The news was announced by Brian May, founder and guitarist of the same legendary rock band Queen, as well as an astrophysicist (co-founder of Asteroid Day). It made the fans of Freddie Mercury and Queen extremely happy. It was an extraordinary, further occasion to celebrate an immense artist and his extraordinary, eternal legacy.

At Virtual Telescope, where we are great fans of Queen, we wanted to image asteroid (17473) Freddiemercury at the end of the year, as it was for us a good way to wish to the world a great, new 2017, in the name of the unforgettable Freddie.

The image above comes from the average of eight, 300-seconds exposures, remotely taken with the “Elena” (PlaneWave 17″+Paramount ME+SBIG STL-6303E) robotic unit part of the Virtual Telescope. The robotic mount tracked the apparent motion of the asteroid, so stars are slowly trailing, while the asteroid is the little sharp dot in the center, marked with two red lines. The asteroid was low on the South-Eastern horizon. To our knowledge, this is the first image of asteroid (17473) Freddiemercury made public since the naming was announced last Sept.

Also Brian May has an asteroid named after him, and we imaged it last Sept.

Below is a video where Brian May announces asteroid Freddiemercury, last 5 Sept. 2016.