Where is comet Ison: November 2013 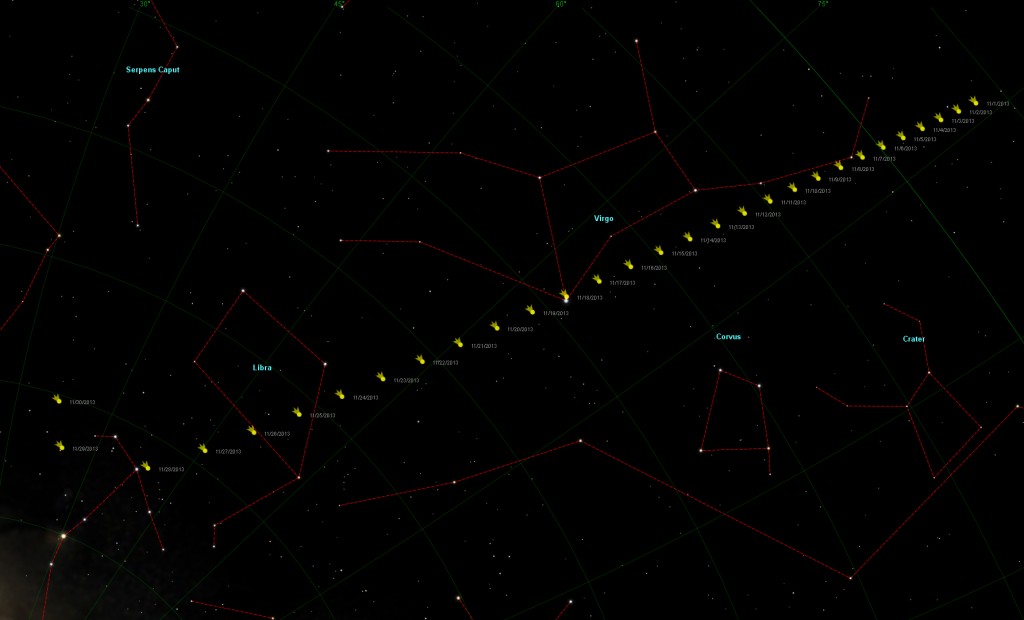 Since its discovery in Sept. 2012, comet C/2012 S1 Ison attracted a lot of attention. Early evaluations of its orbit showed a great potential for a memorable show, with the most optimistic scenarios reporting a maximum brightness comparable to that of the full Moon (!). But we know very well: comets are always ready to behave as they like, no matter the prevision.

Over the next months, comet Ison was closely monitored by both professional and amateurs astronomers and many scientific programs were prepared to get the most from its apparition. Lots of rumors have been heard about the fate of the comet, going to brush our Sun next 28 Nov. 2013, reaching a minimum distance from it of less than 2.000.000 of km.: will the comet nucleus survive from this very close approach? Good question!

Since the comet showed again at dawn last Aug. After its conjunction with the Sun, it has been continuously observed, also to understand its brightness evolution against the previous models. At one side, they suggested a less optimistic scenario, on the other side physical data indicate this comet can have some further, nice surprises around its perihelion.

It looks like that so far half of its nucleus was not exposed to the Sun: as soon as it will see its light and heat around the perihelion, one could expect a sudden increase of activity (which would be lots of fun!).

Virtual Telescope observed comet Ison several times over the last years and soon we will schedule a pubic event to share the comet live.

You can observe the comet yourself. Right now (Oct. 30) , comet Ison is around mag. 10.0 and it is brightening . You can try to image it quite easy, as well as visual observation (with scopes large enough to capture it: imaging is much more effective, with a given scope, capturing a faint object). The elongation from the Sun is dropping quickly, too, so observing the comet can be a bit hard, unless it will decide to give a brilliant show!

Above is a star chart showing made with TheSkyX Professional where comet C/2012 S1 Ison will be this month, crossing the stars of Leo. The object is accessible before dawn and its angular distance from the Sun will reduce soon, so it is not an obvious target, but for sure a very rewarding one.

These next weeks will say more and we will better understand what to expect later this year, hoping in a memorable show. And let say it clearly: the end of the world is not coming with this comet